Man, I never thought I'd miss Kanye from Twitter. Turns out I was ignorant. His finger taps are mercurial, be they accusing Nike of plagiarising his Yeezy designs, designer tattoos that are actually copy and pasted from the internet or announcing two new albums.

Go your own way and let tongues wag.

The latest chapter in this tweet odyssey is my personal favourite.

From the top: Kanye says he doesn't agree with everything Trump does but he's still his "brother."

You don't have to agree with trump but the mob can't make me not love him. We are both dragon energy. He is my brother. I love everyone. I don't agree with everything anyone does. That's what makes us individuals. And we have the right to independent thought.

What followed was an exercise in damage limitation without admitting that you have done anything messed up, Kanye style.

my wife just called me and she wanted me to make this clear to everyone. I don't agree with everything Trump does. I don't agree 100% with anyone but myself. 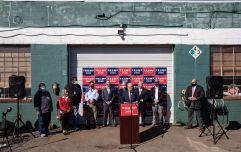 END_OF_DOCUMENT_TOKEN_TO_BE_REPLACED

This picture of what is definitely not a kidnapping came out next.

The music visionary then seemed to think "fuck this" and opted to go all in once again.

This bizarre little love-in then took a stranger turn as Trump thanked Kanye, a message which Kanye then proudly shared himself. END_OF_DOCUMENT_TOKEN_TO_BE_REPLACED

He posted a pic of his house, referencing horror hit Get Out's 'sunken place.'

It originally made only ripples. But once Kanye had caught Twitter's wrath with his Trump confessional, Get Out director Jordan Peele returned to it, saying it had inspired him to write a sequel to 2017's genre defining horror.

*Gets inspired
*Starts writing ‘Get Out 2’ https://t.co/zqOW6Xxx9v

Get Out 2 is yet to be officially confirmed but judging by the quality of the first film, one hopes Kanye's red-pilling serves as adequate inspiration for a sequel.

popular
Man knocked out in single punch by ASDA security guard and dragged across floor by his hoodie
Gordon Ramsay hits back at radio host for 'fat-shaming' daughter Tilly
Influencer criticised for photoshoot at her dad's funeral
Average number of sexual partners in UK revealed
John Lewis ad featuring boy in dress has been banned
Darren Fletcher shares incredible story of how Walter Smith helped transform Cristiano Ronaldo
Organiser of flight which killed Emiliano Sala found guilty over deaths
You may also like
Social Media
Donald Trump's Truth social media platform has already been hacked
News
Trump - who lied 30,573 of times as US president - launches 'Truth' social media site
News
'I'm not into golden showers' Donald Trump declares in bizarre off-script moment
News
Most Republicans want Trump to be President again, they just don't believe he will
Sport
Evander Holyfield TKO'd by Vitor Belfort in first round as fans chant for Trump
Next Page