As we're sure you're well aware, it was Gary Barlow's 46th birthday last Friday.

There's no doubt you all had the date marked on your calendars and popped birthday cards in the post to the Take That singer and former X Factor judge.

END_OF_DOCUMENT_TOKEN_TO_BE_REPLACED

One person who was apparently keen to celebrate Gary's birthday was former X Factor finalist Sam Callahan. Callahan appeared on the 10th series of The X Factor in 2013, alongside Barlow who was on the judging panel at the time, so it's fair to say that the two had rubbed shoulders.

However, that perhaps didn't give Callahan licence to celebrate Barlow's birthday in the manner that he did: by tweeting two semi-nude photos of him. 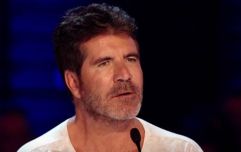 END_OF_DOCUMENT_TOKEN_TO_BE_REPLACED

Fair play, if any of us looked like that in the buff, we'd be only too happy to get our kit off for magazines. Well, it was the '90s, things were different then.

It's understandable, really. When you're 46 and establish yourself as a fairly well-respected singer and songwriter, you don't want pictures from the past coming back to haunt you.

So, yeah. Sorry about that, Gaz.