The series' creator, Robert Popper, took to Twitter to react to the deeply saddening news that Paul Ritter - who played the iconic dad, Martin Goodman, in the show - has passed away from a brain tumour:

Devastated at this terribly sad news. Paul was a lovely, wonderful human being. Kind, funny, super caring and the greatest actor I ever worked with x https://t.co/yD6QpHEeo8

As you can see, his admiration for the 54-year-old was clear: "The greatest actor I ever worked with" being no small claim for a man who has worked with so many great, British talents.

Whether as an actor, producer or writer, Popper has been involved in all manner of comedic projects: everything from Black Books, Peep Show and The IT Crowd, to featuring in The Eleven O'Clock Show and the first two films in Edgar Wright's 'Cornetto Trilogy' (Shaun of the Dead and Hot Fuzz). He's even written for South Park.

For a man with these kinds of credentials, this level of compliment cannot be understated and we tend to agree - there hasn't been a role on telly that encapsulated kooky, eccentric dad like Martin Goodman in some time.

Ritter wasn't only known for his comedic chops, having played popular roles in HBO's Chernobyl, Harry Potter and the James Bond film, Quantum of Solace. His range was incredible and seemed just as capable of cracking you up as he did filling you with terror. British author and public historian, Greg Jenner, joined many others in adding his tribute:

#PaulRitter had tremendous technique and range, capable of hilarious farce, weary-eyed warmth, or terrifying rage. If you haven’t seen it, I demand you watch #Chernobyl on @NOW. It’s astonishing TV, and he is mesmerisingly scary in it 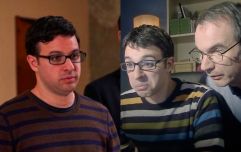 END_OF_DOCUMENT_TOKEN_TO_BE_REPLACED

In honour of Ritter, who brought us so many laughs in Friday Night Dinner, we couldn't react to this news in any other way than simply exclaiming "shit on it!"

We're not "bloody boiling" but we are bloody upset - here's hoping you're enjoying "a lovely bit of squirrel" in the next life.

popular
Man faces three years in jail in Dubai for legally smoking marijuana in his own country
Cop who pepper sprayed Black US army officer at traffic stop fired
A definitive ranking of every swear word from worst to best
Comedian learns Prince Philip died while mocking him onstage
Here's how to see who's been taking screenshots of your Instagram Stories
Prince Philip gets final wish after asking Queen to 'stick me in the back of a Land Rover'
Bodybuilder suffers horrific pec tear injury while bench pressing 220kg
You may also like
News
Friday Night Dinner celebration episode to be dedicated to Paul Ritter
Entertainment
Meghan Markle's Suits co-star demands Royal Family 'back off and apologise'
Entertainment
Martin Compston reveals moment he delayed Line of Duty filming to watch Scotland penalty shoot out
Entertainment
Pokémon card listed on eBay for $9.99 sells for over $300,000
Entertainment
Hayden Christensen and Ewan McGregor to start filming Obi-Wan Kenobi series
Next Page