TV that gets both the heart and the brain pumping doesn't come along very often.

Black Mirror pulls that off really well by telling some amazing stories in a world like ours, but not exactly ours, and putting an interesting spin on big ideas that'll definitely get you thinking (and talking) for hours afterwards.

Channel 4 have clearly picked up on that mindset too, with their new anthology series Electric Dreams.

Based on the stories of Philip K. Dick - the genius mind behind the likes of Total Recall, Blade Runner and Minority Report - the show will tell ten standalone stories week on week, starting on Sunday 17 September.

The first episode is entitled The Hood Maker, and tells the story of the remains of mankind fighting a group of telepathic mutants in the aftermath of a global cataclysm.

It was directed by Julian Jarrold (Kinky Boots, Red Riding 1974) and stars Game Of Thrones' Richard Madden and The Borgias' Holliday Grainger. 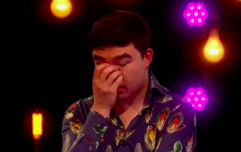 END_OF_DOCUMENT_TOKEN_TO_BE_REPLACED

Meanwhile, behind the camera, the writers and directors of the likes of The Night Manager, Game Of Thrones, Doctor Who, Peaky Blinders, This Is England, Friday Night Lights, Fargo, The Affair, Battlestar Galactica, National Treasure (the Robbie Coltrane one, not the Nicolas Cage one), The Young Pope, Empire, Pacific Rim, Masters Of Sex and Justified are involved.

So... y'know... just about the best writers and directors going.

Electric Dreams kicks off on Channel tonight at 9pm.

popular
Uproar over VAR decision to rule out Ollie Watkins' equaliser against West Ham
A definitive ranking of every swear word from worst to best
People who refuse COVID vaccine could be banned from football matches and the cinema
Moderna vaccine trial shows 100% efficacy in dealing with severe Covid-19 infections
Troy Deeney criticised for comments on David Luiz's collision with Raul Jimenez
Rita Ora apologises for hosting lockdown-breaking birthday party in London restaurant
QUIZ: Fill in the missing club from these players' career paths - Part 6
You may also like
Television
QUIZ: Can you match the Father Ted quote to the character who said it?
Football
A must-see Jurgen Klopp documentary on Channel 4 this evening
Entertainment
The End of the F***ing World season two: Alex Lawther and Jessica Barden on teens, violence and meeting fans
Entertainment
QUIZ: How well do you remember Garth Marenghi's Darkplace?
Entertainment
COMEDY BOX: Why you need to watch... The Tez O'Clock Show
Next Page