Are we suffering from Star Wars fatigue?

First up, we should point out that Solo is actually a pretty, solid fun film. Like, it’s not a masterpiece, it is not era defining or anything. But it’s an enjoyable space movie to spend a Sunday afternoon in the cinema with, and Donald Glover and Phoebe Mary Waller-Bridge steal the show. Plus, there’s a great reveal late on which we won’t spoil, in case you somehow don’t know about it yet.

However, while the reviews and audience reaction was pretty solid, Solo didn’t do the business Disney hoped it would. It ‘only’ made $103 million at the US box office in its opening weekend. Experts predicted the movie would take $130m (£97.6m) and $150m (£112.7m) in its first weekend, and initial takings were well down on both Rogue One and The Last Jedi.

Solo has since made $341.9 worldwide in its first four weeks. Rogue One did $424 million in the same time, and went on to take over billion worldwide – something Solo is not expected to do.

Solo was the second of Disney’s line of Star Wars spin-offs, following Rogue One. They had intended to release the spin-off movies every other year, between the main saga movies. 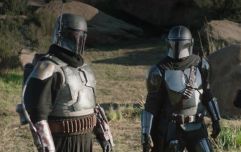 END_OF_DOCUMENT_TOKEN_TO_BE_REPLACED

But following the tepid box office of Solo, Collider are now reporting that they are putting all future spin-offs on hold while they concentrate on Episode IX.

A Bobo Fett film written and directed by Logan’s James Mangold was reportedly in the early stages of pre-production, and an Obi-Wan Kenobi film had also been rumoured – but now it seems these won’t happen.

There have been various theories as to Solo’s under-performance. It came just weeks after two big successful hits, Avengers: Infinity War and Deadpool, and not long after The Last Jedi, making some suggest that people have hit Star Wars  fatigue. We also wrote about how an origin story for Han Solo is something that no one was really asking for.

popular
Deep fake meme lads sing sea shanty that will make you want to abandon your childhood sweetheart and circumnavigate the globe
Netflix announces new true crime documentary about terrifying LA hotel
QUIZ: Name the films referenced by The Simpsons
QUIZ: Identify which of these 50 players played with Wayne Rooney
Rishi Sunak planning one-off £500 payment to benefit claimants
The JOE Friday Pub Quiz: Week 226
QUIZ: How well do you know Cool Runnings?
You may also like
Television
Disney announce 10 new Marvel shows and 10 new Star Wars shows heading to Disney+
Film
Star Wars: Kenobi to film in Boston, Lincolnshire not Boston, Massachusetts, and Americans are confused
Film
George Lucas wanted Darth Maul to be the villain of the Star Wars sequel trilogy
Quiz
QUIZ: How well do you remember The Mandalorian Season 1?
Quiz
The Hardest Star Wars Quiz You Will Ever Take
Next Page