Solo has been a massive financial disappointment, despite making $103m in its first weekend

Have we hit peak Star Wars?

For years, decades even, the idea of a solo Han Solo movie thrilled Star Wars fans. But it only became a reality when Disney purchased Lucasfilm in 2012. As well as starting work on the new trilogy which has already given us The Force Awakens and The Last Jedi, Disney also started a series of spin-off, stand alone films. First up was Rogue One, telling the story of how the rebels obtained the Death Star plans, to be followed by a Han Solo prequel movie.

Solo: A Star Wars Story had a rather rough production. Initially, it was to be directed by Phil Lord and Christopher Miller, the geniuses behind The Lego Movie and 21 Jump Street – which was great news as those guys have an excellent track record. However, in June 2017, they left after ‘creative differences’ and were replaced by Ron Howard – a guy who makes good films but rarely really great ones. It took ages for a trailer to came out, and rumours that studio bosses were unhappy with lead Alden Ehrenreich performance started to circulate (though to be fair, replacing Harrison Ford was always going to be a big ask).

Things looked to have turned out ok though. The film was met with a decent reception once the critics got to see it, with a respectable 70% on Rotten Tomatoes, and the performances of Donald Glover and Phoebe Waller-Bridge being singled out for praise.

Yet the film has significantly underperformed at the box office. According to the BBC, experts predicted the movie would take $130m (£97.6m) and $150m (£112.7m) in its first weekend. 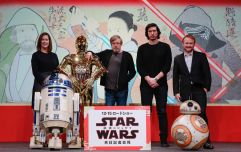 END_OF_DOCUMENT_TOKEN_TO_BE_REPLACED

To put that in perspective, Deadpool 2’s domestic debut weekend was $125m, and Avengers: Infinity War’s was an incredible $250m (the biggest of all time). It is also way behind Rogue One.

Solo: A Star Wars Story had a reported budget of $250m.

The Hollywood Reporter called the box office “grim”, and many are suggesting that audience fatigue might be the reason for the disappointing takings. The Last Jedi only came out five months ago, and we’ve had four Star Wars movies since December 2015.

Disney distribution chief Dave Hollis defended the film to THR, saying: “There's a question of frequency, and how many times people will go to the movies. Is this too much and too soon for a third time in a five-week period?”.

popular
Roy Keane and Jamie Redknapp in heated row over Tottenham
Lady Gaga to pay her dogwalker's £70k medical bills after he was shot
Luke Shaw says referee didn't give penalty because it would "cause a lot of talk"
Lee Mason removed from Sheffield Utd vs Liverpool game with injury
The JOE Friday Pub Quiz: Week 232
19 year old student died from sepsis after calling GP 25 times for appointment
Indian man killed by rooster in illegal cockfight
You may also like
Television
Gina Carano removed from The Mandalorian over offensive social media posts
Football
David Moyes compared to Emperor Palpatine from Star Wars in this post-match interview
Film
Daisy Ridley says she "wept all day" after The Rise of Skywalker wrapped filming
Television
Rosario Dawson shares time-lapse video of her incredible make-up in The Mandalorian
Television
The Book of Boba Fett is an original series coming in 2021, Disney has confirmed
Next Page