The genius behind Four Lions, The Day Day and Brass Eye returns to familiar territory

A new Chris Morris project is an event. The satirist and director has been the man behind some of the most savage and controversial British comedy of the last thirty years  - from the news media skewering of The Day Today (and giving the world Alan Partridge), to the tabloid outrage of Brass Eye, to the hipster-baiting prophecy of Nathan Barely.

His last proper work was Four Lions, the 2009 knockabout Brit com that just happened to be about Muslim extremists. Chris Morris is notoriously publicity-shy, and not exactly prolific - so far, the 2010s have only really seen him cameo in Stuart Lee's Comedy Vehicle and direct a few episodes of Veep. But now he's back with The Day Shall Come, his second film as director and his first set in the USA.

And from the trailer, it almost looks like it could be an American remake of Four Lions, if you squint a little bit. Anna Kendrick plays an FBI agent, asked to pitch "the next 9/11" to her boss in terms of potential terrorist threats. Eager to look good to her superiors, she tracks down a small religious commune in Miami, and sets their leader to look the next great threat to American life.

The trailer says it's based on "100 true stories," but Chris Morris has directly pointed to the real-life arrest of an 'army' in Miami that were supposedly about to launch an attack on America.


"Two years later in Washington DC I met a witness from the resulting trial and discovered this terrifying coup would have been pulled off by seven construction workers riding into Chicago on horses," explains Morris in a director's statement. "The idea was a fantasy, spun to make money. They had no guns - and no horses. An FBI informant had offered them $50,000 to attack America. They were broke, so they riffed ideas until he was happy. They claimed they could knock over the Seers Tower, swamp the city with a tidal wave, and seize control by riding in like cavalry."

"The government presented it as an Al Qaeda plot bigger than 9/11. These guys weren’t even Muslims, they were Haitian Catholics. It took three trials to find them guilty. They were all jailed as terrorists." 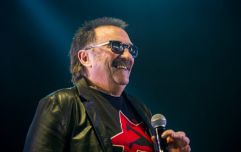 A message from Paul Chuckle to the nation

END_OF_DOCUMENT_TOKEN_TO_BE_REPLACED

The film had been shrouded in secrecy, reportedly being shot over two years ago with very little detail being made public. It then made its debut to at South By Southwest in March, to mostly positive reviews. With Morris taking such a long break between movies, in truth it is slightly disappointing to see him covering what seems like such similar ground to his debut - but Morris doesn't take projects on lightly, so we have faith it'll be worth the wait.

The Day Shall Come is in UK cinemas Friday 11th October.


popular
Nando's is coming back this week
OH WHAT A NIGHT: When Manchester United clinched the Treble, by the fans who were there
Piers Morgan calls out Dominic Cummings for eyesight claims in press conference
QUIZ: Who said it - Prince Philip or Michael Scott?
The JOE Friday Pub Quiz: Week 192
QUIZ: Can you guess the Leonardo DiCaprio movie from a single image?
The hardest brand logo quiz you'll ever take