Announcing that they'll be returning to the UK stage for the first time in three years, Boyz II Men will perform two shows this year, the first being August 24th at the Eventim Apollo in London followed by a second show on August 25th at the O2 Academy in Birmingham. 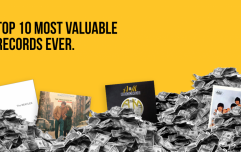 Cha-Ching! These are the top 10 most valuable records ever made

END_OF_DOCUMENT_TOKEN_TO_BE_REPLACED

Standing tall with some of the record-breaking music elites, such as Elvis Presley, The Beatles and Mariah Carey, Boyz II Men are the fourth music act ever to have spent 50 cumulative weeks at the number one spot in Billboard history.

With four Grammy Awards, three Billboard Awards, nine American Music Awards and Soul Train Awards to their name, as well as a MOBO award for Outstanding Contribution to Music, a star on the Hollywood Walk of Fame and a street named after the group in Philadelphia, Boyz II Men  have had quite the career with over 30 years in the music business.

Starting with their platinum selling debut album Cooleyhighharmony, produced by New Edition singer Michael Bivins in 1991, the group went on to release 12 studio albums that put them in the upper echelon of artists when it comes to R&B.

So with that said this is a show you don't want to miss.

Pick up tickets at the following:

popular
The JOE Friday Pub Quiz: Week 296
Japanese man spends £12,480 to look like a border collie - and it kind of works
Ricky Gervais finally says what we're all thinking about the Johnny Depp Amber Heard case
Rio Ferdinand and John Terry in Twitter war after controversial 'top 5' pick
Husband of teacher killed in Texas school shooting dies after suffering heart attack
Amber Heard's lawyers will not call Johnny Depp back to the stand amid suggestions he is 'uncontrollable as a witness'
Kourtney Kardashian told to drink Travis Barker's sperm by doctor
You may also like
Sport
Andrea Pirlo recreates Beatles album cover in Instagram post after Liverpool vs AC Milan legends match
Music
QUIZ: As The White Album turns 50 how well do you know The Beatles?
Music
The Beatles to celebrate The White Album with epic 50th anniversary releases
Music
The JOE Music Quiz: Week 17
Music
The JOE Music Quiz: Week 16
Next Page