Arnold Schwarzenegger and Logan Paul are set to team up together to host the world Slap Fighting Championships in Columbus, Ohio.

END_OF_DOCUMENT_TOKEN_TO_BE_REPLACED

The two have joined together to create the tournament, which will take place in March and feature some of the world's best slap fighting stars from around the globe.

For those not familiar with the rules to an official slap fight (and there probably aren't many of you) it's quite straightforward.

Two people stand opposite sides to each other and slap each other. They have three rounds where each competitor gets one slap each with three judges on hand to judge the slaps.

END_OF_DOCUMENT_TOKEN_TO_BE_REPLACED

If a competitor is unable to return a slap within 30 seconds, then it is then classed as a knockout.

YouTube star Logan Paul made the announcement recently on his Impaulsive podcast and during an interview with USA Today explained why he was so keen to play a part of the tournament.

"I love the absurdity of it," Paul said.

"I love the idea that two guys could just stand across from each other and just slap each other and see who falls down first. It’s hilarious to me. It’s like, how is that a real event?" 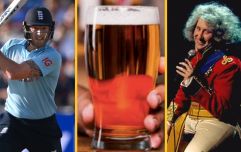 END_OF_DOCUMENT_TOKEN_TO_BE_REPLACED

Meanwhile Hollywood star Schwarzenegger added: "I  know we’re going to have a great time watching the slap competition as long as we don’t get slapped."

Paul went on to admit that he did originally have plans to compete in the tournament itself, but decided against it - not wanting to risk getting a serious injury.

"I was too scared of getting my brain slapped out of my head. So I backed out. But I’ll gladly watch other crazy people do it," he said.