Can they possibly top 'Man getting hit by football'?

The decline of The Simpsons is one of the great tragedies of the early 21st century. However, one of the few moments where the show came close to hitting the heights of its golden era was 2007’s The Simpsons Movie. Many of the show’s greatest writers and animators came back to produce an adventure worthy of the big screen.

In the decade-plus since its release, there have been rumours of a sequel, but nothing concrete. Showrunners Al Jean and David Mirkin said that the 2015 episode’ The Man Who Came to Be Dinner’, where the family get kidnapped by Kodos and Kang, was considered to be adapted into a theatrical sequel, but ultimately was just a regular episode.

That wasn’t the only detail to come out though. The article also revealed that everyone’s favourite Simpsons rip-off, Family Guy, is also scheduled to get the big screen treatment. In 2005, the 88 minute special Stewie Griffin: The Untold Story was released on DVD – but that was ultimately just three regular episodes designed to be split up for TV syndication. 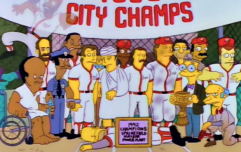 END_OF_DOCUMENT_TOKEN_TO_BE_REPLACED

No details on either movie was given in the article – but all we can hope is that it not a crossover between the two of them. Because that episode of Family Guy, ‘The Simpsons Guy’, was not good.

Oh, and for the record, American Dad is loads better than Family Guy.

popular
The Only Way Is Essex star Mick Norcross dies, aged 57
The JOE Friday Pub Quiz: Week 227
A definitive ranking of every swear word from worst to best
'Kent variant' of Covid could be 30% more deadly than original strain, PM reveals
Police break up wedding party with 400 guests at school
Bernie Sanders memes spread like wildfire after Joe Biden inauguration
People think Jennifer Lopez lip-synced at Joe Biden's inauguration
You may also like
Quiz
QUIZ: Match The Simpsons quote to the character who said it
Entertainment
QUIZ: Name the obscure characters from The Simpsons (Part Three)
Television
The new voice actor for Carl on The Simpsons has been announced
Entertainment
QUIZ: How well do you remember the Who Shot Mr. Burns episodes of The Simpsons
Entertainment
QUIZ: Name the obscure characters from The Simpsons (Part Two)
Next Page