This is truly frightening stuff.

This week saw yet another mass shooting in America, this time at a college in Oregon where 10 people died, including the gunman.

According to the Independent, British mapping company Esri UK have responded by illustrating the sheer scale of gun violence which has occurred throughout America in 2015.

The criteria is that four or more individuals had to be either wounded or killed in a shoot-out in order to make the map, and the results are staggering. 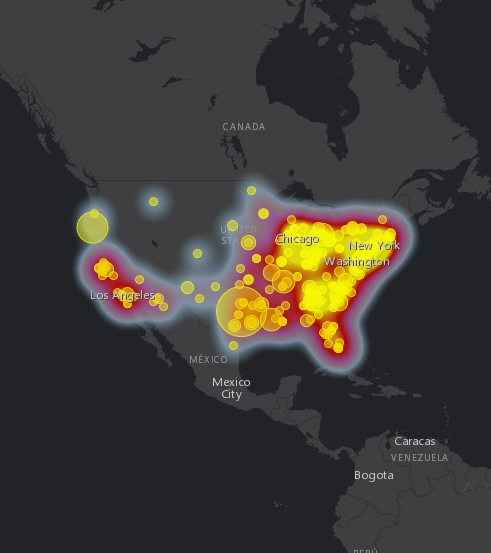 It shows that there has been a shoot-out for every single week of the year so far in America, reaching 264 mass shooting in total.

popular
Andy Murray "incredibly irritated" by Cristiano Ronaldo 'SIU' celebration at Australian Open
Bride asks for divorce day after wedding following groom's disrespectful cake stunt
Impotent man's partner accidentally sprays insulation foam inside penis during sex
Piers Morgan sums up why 'Partygate' is so damaging in two minutes
Mystery thumb uncovered in original uncropped version of Prince Andrew pic
Line of Duty stars reprise roles to slam Boris Johnson in brutal AC-12 interview
Referee who made AC Milan mistake was 'in tears' and 'state of shock' after the game
You may also like
News
Man killed by police searching for twin brother
Crime
Man allegedly lied about SpaceX job then dismembered parents when they found out
News
US democracy 'could collapse by 2025', Canadian professor warns
News
Witches curse US lawmaker for voting down Joe Biden’s spending bill
News
Capitol Hill rioter asks judge for permission to use his social media to find him a date
Next Page