There's confidence, there's arrogance, there's delusion and then there's whatever Conor McGregor has going on for him.

For the vast majority of fighters, the prospect of taking on arguably the greatest boxer in his domain would be enough to make you a little nervous. However, a couple days out from his professional boxing debut against Floyd Mayweather, Conor McGregor was yucking it up with Dana White.

In the latest installment of the fly-on-the-wall Embedded series promoting the money fight to trump all money fights, there was a pretty humorous moment involving Dana White, Conor McGregor, a phone and a penis.

With Conor McGregor sitting beside him, Dana White was on the phone with someone who sounded fairly important on the other end of the line. The line was fairly muffled, but you could make out a few lines of the conversation, including.

At that moment, McGregor became distracted. It was one of those rare moments where we've seen him lose focus. He pointed off camera and said, 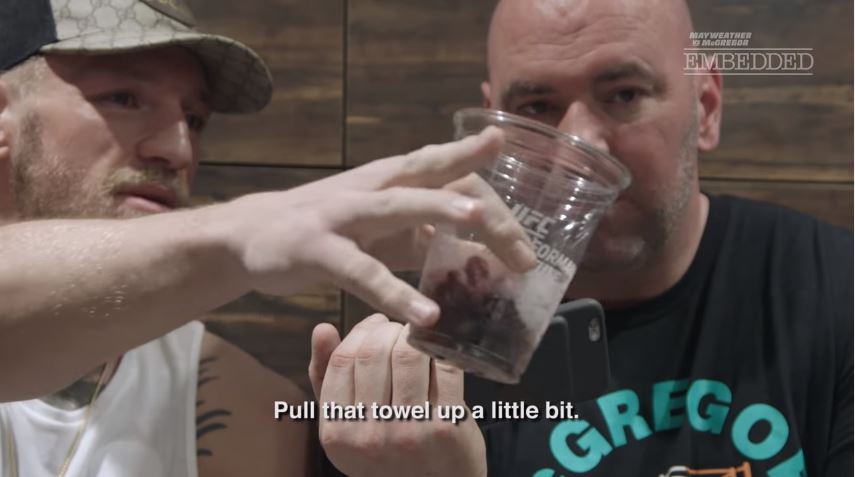 He repeated the order, causing White to lose focus as well. The UFC president simply did not take in anything that was being said to him and was forced to explain the situation to the other guy.

"Say that again... He was staring at some penis when you were (starts cracking up) talking. His mind wasn't into your conversation."

Laughter ensued as McGregor detailed what had just happened. Just after he explained himself, the culprit was revealed to be his conditioning coach Dr. Julian Dalby, who entered the shot wearing a towel.

"I seen the V like right here. (signals at crotch) I just seen pubes! (laughs)"

"He was little distra...(burst into laughter)."

Check out the lighthearted moment in Mayweather vs McGregor Embedded: Vlog Series Episode 5 embedded below. The action kicks off from about the 2:35 mark.