Chinese clubs just have money to burn at the moment.

Mega bucks have already been splashed out on Jackson Martinez and Alex Teixeira by Chinese Super League sides. 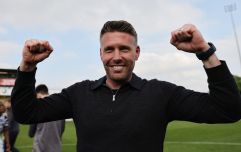 END_OF_DOCUMENT_TOKEN_TO_BE_REPLACED

While the lure of big money was apparently too much to resist for the likes of Atletico Madrid man Martinez and one-time Liverpool target Teixeira, there was one player having none of it.

That's free-scoring striker Odion Ighalo. The forward, who has bagged 14 league goals for the Hornets this season, revealed he was also subject of a big money bid from the Far East.

He was offered a ridiculous £300,000-a-week deal to join Hebei China Fortune BEFORE this Premier League season had already started (so f**k knows what they'd be willing to shell out on him now).

Ighalo revealed he mulled over the eye-watering offer for a few days - but he said God set him straight. 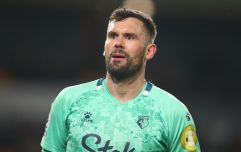 END_OF_DOCUMENT_TOKEN_TO_BE_REPLACED

'I couldn’t sleep for three days. That kind of money is not easy to turn down. Some team-mates in the dressing room were saying, “You can’t miss this chance”. But I don’t jump into decisions like that.

‘I prayed about it, and God said it was not for me, no matter how much money it was. I knew God would direct me. When I said I don’t want to go, they offered me more money, almost £300,000 a week. I told them it’s not about the money.’

END_OF_DOCUMENT_TOKEN_TO_BE_REPLACED

Ighalo's dream was always to play in the Premier League - and he stuck to his guns. His 14-goal haul was rewarded with a bumper new contract at Watford - erm, £30,000-a-week.

‘They have called again and I have turned them down again,’ Ighalo told the Daily Mail.

‘I helped this team to promotion. How can I leave because of money? I know money is good. With that sort of money I can secure my life. But you can’t sell your dream.

‘Maybe if I keep scoring goals, that team will come with triple the money at the end of the season. When the time is right to go to China I will know. If it’s for me it will come to pass.'

Massive respect for this.

popular
Amber Heard says her sister taught Johnny Depp to snort cocaine with a tampon
Martin Skrtel retires from football due to health reasons
UK’s Sam Ryder may have actually come third amid possible Eurovision voting scandal
Wagatha Christie: Wayne Rooney describes 'awkward' moment he asked Jamie Vardy to get his wife to 'calm down'
Lip readers analyse what Johnny Depp’s lawyer told him as they celebrated in court
Sheffield United manager sparks chaos in Forest clash after aggressive move on Djed Spence
Megan Fox reveals she 'cut a hole in the crotch' of her jumpsuit to have sex with Machine Gun Kelly
You may also like
Sport
Watford set to appoint Roy Hodgson as new manager following Ranieri sacking
Sport
Claudio Ranieri sacked by Watford
Sport
Senegal accuse Watford of refusing to release Ismaila Sarr
Sport
Play paused in Spurs Watford game due to medical emergency in crowd
Sport
Emmanuel Dennis left out of Nigeria AFCON squad after Ranieri suggested call-up was late
Next Page