Breath back yet? Nah. Us Neither...

Okay, okay. Granted, those reading that headline who don't support the English football team are probably sick to the back teeth of hearing this "it's coming home" shit again. 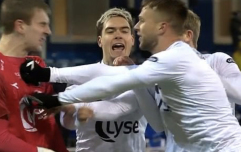 END_OF_DOCUMENT_TOKEN_TO_BE_REPLACED

For this, though, we make absolutely zero apologies.

A 2-0 win in the knockout stages of a major competition against Germany - Germany. This, make no mistake about it, is time to get carried away, to dance in your nearest fountain, to dream that football really is - after all the many, many disappointments - coming the fuck home.

No moment best summed up the sense that this year might actually be different more than what happened shortly after Raheem Sterling had given England the lead.

A stray backwards pass from England's goalscorer found its way to Kai Havertz, who seizing on a slight moment of hesitation from Harry Maguire, slipped the ball into the path of Thomas Muller, to run through on goal.

1-1. Extra time. Lose on penalties. It was all so painfully inevitable for a couple of seconds.

But no. Muller's shot was screwed wide of the post.

Massive let off for England!#ENG 1-0 #GER

After Kane added the second late on, England fans were finally comfortable enough to start mocking it a little bit.

England will now face a quarter-final against either Sweden or Ukraine in Rome.