Buenos Aires rivals Boca Juniors and River Plate should have concluded their final at the end of last month, but the game was called off after River fans attacked Boca's bus while en route to El Monumental. 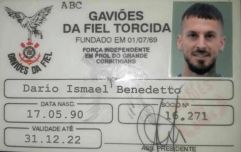 END_OF_DOCUMENT_TOKEN_TO_BE_REPLACED

After some uncertainty as to whether or not the game would be played at all, it was eventually announced it would be played at Real Madrid's Santiago Bernabeu stadium - the first time the final had ever been played outside of South America.

The decision hasn't been well received by everyone, with River initially releasing a statement indicating they would not be playing the game.

The game is, however, going ahead, with Boca captain Carlos Tevez the latest to voice his disappointment at the decision to play the game in Madrid.

END_OF_DOCUMENT_TOKEN_TO_BE_REPLACED

"It is a bit weird to play here but it is important for us to focus on how the game will be in Madrid," said Tevez.

"I think it is embarrassing for the people, not so much for the players," the former Manchester United and Manchester City striker told the BBC World Service.

"They took away our dream of playing the final in our country."

Some of Boca's team were injured in the attack on the bus, cut by broken glass after its windows were broken. They were also affected by some of the tear gas used by police to disperse the crowds.

The first leg was played earlier in November, the two sides drawing 2-2 in Boca's la Bombonera.

"It is important because it is still a final," Tevez continued.

"It is rare because of where it is going to be played, but it is still a Copa Libertadores final."

The game will be played on Sunday evening, kicking off at 7.30.