Xherdan Shaqiri is up and running in a Liverpool shirt

Shaqiri completed his move to Anfield from Stoke City after the World Cup and marked his first appearance for his new team with a spectacular overhead kick. 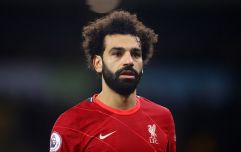 END_OF_DOCUMENT_TOKEN_TO_BE_REPLACED

Liverpool won their International Champions Cup game against Manchester United 4-1 in Michigan, with the Swiss international scoring the last - and the pick - of the goals, minutes from full-time.

Footage of the goal has been shared high and wide across social media in the time since, eventually reaching Shaqiri's former Stoke teammate, Peter Crouch.

Like Shaqiri, Crouch knows a thing or two about scoring spectacular overhead kicks for Liverpool. The 37-year-old spent three years with the Merseyside club between 2005 and 2008. While on the Liverpool payroll, Crouch scored 42 times - a particularly memorable acrobatic effort against Galatasaray the pick of the bunch.

However, having joined the club shortly after their Champions League win in 2005, Crouch had to wait months for his first goal - eventually getting off the mark against Wigan in the December of that year.

With all this in mind, Crouch jokingly warned Shaqiri that he should have waited a while before treating his new set of supporters to such an easy-on-the-eye goal.

'No @XS_11official, that’s not how to get the fans onside,' he tweeted. 'Go 6 months without a goal. All this comes much later,' he added, closing his tweet with a scissor emoji.

No @XS_11official that’s not how to get the fans onside . Go 6 months without a goal . All this comes much later ✂️ https://t.co/55aPu3BWfD

END_OF_DOCUMENT_TOKEN_TO_BE_REPLACED

Following their victory over United in Michigan, Liverpool continue their preparations for the new season with a friendly against Napoli in Dublin on August 4. They will also host Torino at Anfield in a friendly three days later.

Their first league game of the season sees them take on West Ham at home on August 12.