Paul Merson has completely changed his tune about Mesut Ozil and Alexis Sanchez, and their importance to Arsenal.

Which is fine, as people change their minds, and opinions change. But even for Merson, this is quite something. Just over two weeks ago, after Arsenal had recorded victories over Tottenham Hotspur at the Emirates and away to Burnley, Merson tipped them to qualify for the Champions League - but on one condition.

The Sky Sports pundit said that Arsene Wenger must keep hold of Alexis Sanchez and Mesut Ozil if Arsenal are to stand any chance of returning to the elite stage of European competition.

Both players are out of contract at the end of the season, and appear unlikely to sign new deals. Sanchez has been linked with a January transfer to Manchester City, and Manchester United are reportedly interested in Ozil. However, Merson said that the Gunners need to resist any offers in January for the players, as Arsenal's top four hopes depend on them staying.

"I think Arsenal will make the top four, but only if Alexis Sanchez and Mesut Ozil both stay in January. But if they do not, then that top-four order will change again as I would not give them a hope of making the top four." 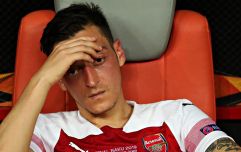 END_OF_DOCUMENT_TOKEN_TO_BE_REPLACED

Fast forward two weeks, and Arsenal have yet to win a league game in December. Manchester United managed to beat them 3-1 at the Emirates, they recorded a 1-1 draw with Southampton and could only manage a goalless draw with West Ham United on Wednesday night. Following those results, Merson wants his former team to let Ozil and Sanchez leave because "they are doing nothing."

"Nothing has changed at Arsenal," Merson said ahead of Arsenal's match with Newcastle United.

"We are 17 games into the season and they are below Burnley. That is embarrassing. You can understand after five or six games, if someone gets off to a flying start, but this is 17 games in. I don't know where Arsenal are going. I have said before that Alexis Sanchez and Mesut Ozil will probably stay but now I think they have to go because they are doing nothing."

In just 16 days, Ozil and Sanchez have gone from saviours of Arsenal's season to dead wood, who need to be shipped out of the club as soon as possible. Since Merson proclaimed the importance of keeping the pair, Arsenal have dropped to seventh place in the Premier League, but they're only one point away from the top four.

popular
Jurgen Klopp calls Man Utd style 'the worst thing you can face in the world' after draw
Matthew Perry's dad was a character on Friends and nobody noticed
Kieran Trippier WhatsApp messages that led to his ban are revealed
Men who lost weight during lockdown share their diet and workout plans
Deep fake meme lads sing sea shanty that will make you want to abandon your childhood sweetheart and circumnavigate the globe
QUIZ: Identify which of these 50 players played with Wayne Rooney
This hidden Back to the Future 'mistake' has a subtly brilliant explanation
You may also like
Sport
Hector Bellerin launches new nine-part Unseen Journey documentary
Sport
Conclusive proof normality is returning as Julian Draxler is linked with Arsenal
Sport
Shkodran Mustafi's agent confirms surprise Barcelona transfer talks
Sport
Arsenal's Alex Runarsson deletes Twitter account after fan criticism
Sport
Micah Richards suggests AFTV is affecting Arsenal players' confidence
Next Page