"You go insane. The insanity of constantly keeping on doing it."

Paul Merson has opened up about the extent of his gambling addiction during his appearance on Good Morning Britain on Tuesday morning.

The former Arsenal and England midfielder has also battled problems with drugs and alcohol but told Susanna Reid and Piers Morgan that he considers his gambling addiction to be "worse".

"I've just found that when you want to get drunk or high you have to put stuff in your body. If you don't have the first drink you don't get drunk.

After facing problems with alcohol and drugs in the past, Paul Merson reveals his battle with gambling addiction was the hardest. pic.twitter.com/tZIY3LsayE 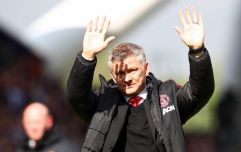 END_OF_DOCUMENT_TOKEN_TO_BE_REPLACED

Merson, who appears regularly on Sky Sports' Soccer Saturday panel, also revealed he found himself betting on Lithuania under-20 basketball matches during the height of his addiction.

"'I've lost millions. The money [lost] is not the problem, it's the sanity, more than anything. You go insane. The insanity of constantly keeping on doing it.

"After the bet goes on, you are like, 'what did I do that for?' It's a weird feeling. You search and search to get the bet on, to get all excited, and as soon as you have done it you’re like, ‘I can’t believe what I’ve done’. Then the self-worth comes in and you hate yourself."

Merson appeared on GMB after opening up about his addictions on ITV documentary Harry's Heroes - The Full English where he admitted he was "struggling badly" with a relapse of his gambling addiction.

popular
The JOE Friday Pub Quiz: Week 227
The Only Way Is Essex star Mick Norcross dies, aged 57
Police break up wedding party with 400 guests at school
Deep fake meme lads sing sea shanty that will make you want to abandon your childhood sweetheart and circumnavigate the globe
'Kent variant' of Covid could be 30% more deadly than original strain, PM reveals
A definitive ranking of every swear word from worst to best
Here's how to see who's been taking screenshots of your Instagram Stories
You may also like
Sport
Paul Merson says Hennessey not knowing about Hitler justified Watford's Deeney appeal
News
Paul Merson thanks fans after opening up on gambling addiction
Sport
Louis van Gaal destroys Paul Merson after Liverpool comments
Sport
Paul Merson's Arsenal claim actually makes a lot of sense
Sport
Paul Merson attempts to pinpoint where Manchester United went wrong in the transfer window
Next Page