She's swum the length of a pool with a glass of milk on her head, what have you ever done?

Olympic champion swimmer Katie Ledecky went viral on Twitter after swimming the length of a swimming pool while perfectly balancing a glass of chocolate milk on her head. 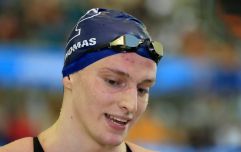 END_OF_DOCUMENT_TOKEN_TO_BE_REPLACED

In what appeared to be an ad for a Tik Tok challenge, the 23-year-old tweeted a video of her successful attempt at the 'Got Milk' challenge. (Can you tell I have never used Tik Tok?)

She described the feat as "Possibly one of the best swims of my career!"

Possibly one of the best swims of my career! (~open for debate~)
What can you do without spilling a drop?! Check out the #gotmilkchallenge on TikTok. #gotmilk #ad pic.twitter.com/F05UzvaqCo 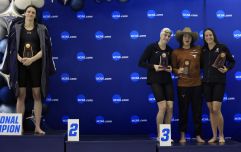 END_OF_DOCUMENT_TOKEN_TO_BE_REPLACED

It's an absolutely captivating watch. You keep thinking eventually the glass will fall. But guess what? It never does. Quite remarkable.

The challenge has caught on since her post with the New York Islanders Ice Hockey club account posting a video of their mascot, Sparky, gliding around the ice with a glass of milk on the head of his costume - also pretty impressive.

We saw what you can do in the water but what about what Sparky can do on the ice?! 🍫🥛 #Isles #GameOn pic.twitter.com/CZhDngs8RL