This beats having to cut off the collar every time

Eintracht Frankfurt player Martin Hinteregger doesn't like collars, apparently. Perhaps the 28-year-old defender doesn't like how it feels on his neck. Maybe he has sensitive skin and it chafes him. Anything is possible.

The point here though is that his aversion to collars is such that the Austrian international has in recent years taken to actually cutting off the collar on his Eintracht Frankfurt shirt before matches, as seen below. 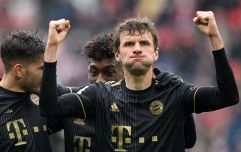 END_OF_DOCUMENT_TOKEN_TO_BE_REPLACED

Frankfurt's current away kit for the 2020/21 season comes with a polo neck collar as standard, but with Hinteregger insistent upon cutting his off - seemingly with a scissors - Nike decided to create a custom shirt especially for him.

That special shirt was worn by Hinteregger for the first time in Frankfurt's recent Bundesliga match against Union Berlin, which finished 3-3 in the German capital.

What exactly this means remains to be seen. Is it a one-off? Or will we increasingly see footballers' own personal tastes catered for with football shirts? Only time will tell.

popular
Ricky Gervais finally says what we're all thinking about the Johnny Depp Amber Heard case
New Time Traveller's Wife series airs 'incestuous' oral sex scene that has left everyone divided
The JOE Friday Pub Quiz: Week 296
Binley Mega Chippy: What is it and why is it all over my timeline?
Wimbledon to drop Mrs and Miss on women’s honours board to match men's titles
Gangland enforcer charged £6K to attack victims with acid and £10K to blind them
Japanese man spends £12,480 to look like a border collie - and it kind of works
You may also like
Sport
Bochum-Mochengladbach game abandoned after linesman hit by object
Sport
Stewards seen punching fans at Stuttgart vs Monchengladbach match
Sport
New Bundesliga boss open to idea of play-offs to decide winner
Sport
German coach goes viral for animated living room antics
Sport
Half the Gladbach team could be up for grabs this summer
Next Page