"Wow, what a generation."

Jürgen Klopp needed to double-check Marcus Rashford's age before including him as the experienced head in an exciting crop of young English attacking stars. 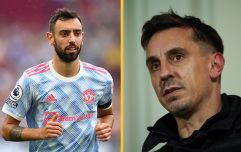 END_OF_DOCUMENT_TOKEN_TO_BE_REPLACED

Klopp was at Liverpool's Melwood training facilities for a press conference looking ahead to his side's Thursday evening Premier League encounter with Manchester United.

The Reds are currently sixth in the league standings, but could climb to fifth and go four points behind Chelsea, who are in the last of the four available Champions League spots for 2021/22. To do that, they would have to replicate Leicester City's result, from Tuesday, and beat United at Old Trafford.

Ahead of the game, Klopp offered his congratulations to Manchester City, who claimed their fifth Premier League title in a decade when United fell 2-1 to Leicester.

"Great achievement, congratulations," the German began. "I texted Pep last night and already texted Ilkay [Gundogan]. A very difficult year for the whole world and what they achieved so far this season is exceptional. If you have financial resources and football knowledge, you have a good chance."

Klopp says he has no concerns about security ahead of the fixture against United, which is happening on Thursday after their original May 2 game was postponed. A sizeable contingent of United supporters broke into Old Trafford, on that date, and the Premier League rescheduled the tie after consulting with the police, and both clubs.

Focusing, instead, on the game, Klopp pointed out that United had all but secured second place in the league and added that Ole Gunnar Solskjaer had done a good job in his second full season with the club. On United's attacking talents, he was fulsome in his praise:

"Age-wise, United have a really good mix of offensive potential. I'm not sure if... how old is Marcus Rashford - 22, 23? He looks quite young but is obviously very experienced.

"It's absolutely incredible - if you count them all, you ask who are you going to leave out? You have Greenwood, Foden, Mount, then Sterling and Sancho on top of it. Wow, what a generation."

END_OF_DOCUMENT_TOKEN_TO_BE_REPLACED

On his side's increasingly thin hopes of securing Champions League qualification, the Liverpool boss commented, "We don't blame anyone but ourselves. Now we need help from other teams, but it's the best we could get and we will deal with that."

Asked about United making 10 changes from their starting XI that beat Aston Villa on Sunday, for the Leicester game, Klopp said he could always envisage that happening with a Sunday-Tuesday-Thursday run of league games.

"I would have done exactly the same thing," he declared.

🗣"To play Sunday, Tuesday & Thursday is a crime."

Liverpool boss Jurgen Klopp has his say on Manchester United's team selection during their 4 games in 8 days pic.twitter.com/epUNZP96pF

Such comments may see some Liverpool fans soften their cough after criticising United's team selection against a fellow Champions League-chasing side.