Safe to say Jermain isn't going for a few scoops after a match.

Professional footballers can often get a hard time when their perceived commitment to their craft doesn't tally with the vast wages they are paid. END_OF_DOCUMENT_TOKEN_TO_BE_REPLACED

Or at least fails to do so in the eyes of the media and/or public.

The recent furore over Wayne Rooney shows just how little rope people are prepared to give a footballer when he chooses to do what most other folk his age are doing on a Saturday night.

Jermain Defoe is not necessarily the player who would jump to mind when the phrase 'model pro' is thrown out there but the Sunderland striker's approach to alcohol would gladden the heart of any strength and conditioning coach. 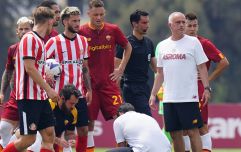 END_OF_DOCUMENT_TOKEN_TO_BE_REPLACED

Defoe admits he has become so obsessed with avoiding alcohol that he refuses to let restaurants use wine in dishes they are cooking,

The former Spurs and West Ham striker's approach to booze is partly due to his father, who died from throat cancer four years ago, having a particular fondness for a drink and Defoe being warned away from it at an early age.

But in a series of extremely revealing interviews, Defoe has expanded on how far he will go to avoid drink, eat healthily and prolong his career.

"I don't drink, because I don't think I need to. When I finish playing one day I can say to myself 'you know I did everything right'. That's the time when you can enjoy yourself and, I suppose, drink although I don't think I'll really drink. I don't think I'll want to. I've never said it before, my dad used to drink a lot so that's one of the reasons why I don't. My mum has said over the years 'try not to drink if you can'.

"All along I've tried not to get in that habit of drinking, because you don't need it if you want to keep performing at the highest level for a long time. I went to a restaurant the other day, they had sea bass on the menu with white wine sauce and I actually asked the waitress if I could have the fish without the white wine.  She looked at me and probably thought 'what's wrong with a little bit of white wine? You're meant to be an adult'. But I said, please, just tell the chef, no thanks.”

"I think you get more out of yourself if you don't drink. I'm not saying I don't do anything wrong. There's loads of things I do wrong - I think people will have read in the papers. But I do try to do the right things. If you look after yourself and you don't drink, you eat the right things, you have rests, you sleep then you feel ready for the game at the weekend and you've given yourself the best chance because you've not gone out drinking."

It's probably just as well that playing for Sunderland he doesn't encounter too many bottles of celebratory champagne.