Jake Paul thinks his boxing record is better than Canelo's

A bold claim, for sure.

Jake Paul thinks his boxing record is better than that of Saul 'Canelo' Alvarez - arguably the best pound-for-pound fighter alive.

END_OF_DOCUMENT_TOKEN_TO_BE_REPLACED

Paul is set to go up against highly-decorated UFC welterweight Tyron Woodley on August 29th, but that hasn't stopped him taking aim at others in the meantime.

In a recent tweet, Paul compared his boxing record to Canelo's and seemed to suggest his was superior.

He wrote: "Canelo Alvarez's opponent in his 10th fight was 0-0, and whom after defeat, never fought again. In my 4th fight I'm taking on a pound for pound decorated fighter who has won on the biggest stages and is considered one of the top welterweights ever."

Canelo Alvarez’s opponent in his 10th fight was 0-0, and whom after defeat, never fought again.

In my 4th fight I’m taking on a pound for pound decorated fighter who has won on the biggest stages and is considered one of the top welterweights ever.

END_OF_DOCUMENT_TOKEN_TO_BE_REPLACED

These bouts courted much criticism due to the fact that Paul's opponents had no real boxing pedigree. Ben Askren, his most experienced opponent, is an accomplished wrestler but regarded as a pretty poor striker. 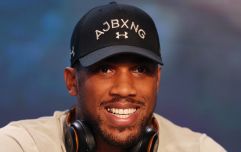 END_OF_DOCUMENT_TOKEN_TO_BE_REPLACED

Canelo, on the other hand, has fought 59 times since making his professional debut aged 15 in 2005. He has only lost once, to Floyd Mayweather, in September 2013. He currently holds the WBA (Super), WBO, WBC, and Ring magazine super-middleweight titles, and is regarded by many to be the greatest active boxer on the planet.

Jake Paul previously said he plans to fight Canelo within the next three years - and get the better of him.

However, the Mexican isn't the only high-profile figure that Jake Paul has fired shots at lately.

He has also been embroiled in a bitter war-of-words with UFC President Dana White.

After White said his "shelf life is very f***ing short", Paul responded emphatically in an interview with MMA Junkie.

He said: "He's an old hater. He sees what I'm doing to his business model. I'm affecting his pockets. I'm talking about fighter pay.

"This guy's betting $7 million on blackjack, but his fighters are starting GoFundMe pages. There's all this bad press about him coming out because of me, and that's messing up his business, and he's going to say whatever he can to diminish what I have going on, and try to ruin it.

"What he doesn’t understand about the internet is him talking about me only adds fuel to my fire."