He has had a troubled career

Giuseppe Rossi could be hit with a year long ban from football after testing positive for dorzolamide. 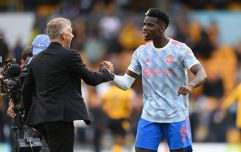 END_OF_DOCUMENT_TOKEN_TO_BE_REPLACED

The anti-glaucoma substance is normally found in eye drops, and would have been legal had he got special dispensation for it, but not doing so has put the striker's career in jeopardy.

The former Manchester United striker, whose career has been plagued by knee ligament injuries, was subject to a random drugs test while playing for Genoa in May. According to Gazzetta dello Sport, Rossi has denied taking the eye drops.

The player has since been released by Genoa and is now a free agent. Having missed lengthy spells of his career due to injury already, a ban that lasts the course of the season is the last thing the 3-1-year-old needs.

He will face a hearing that will determine whether he will be banned, with a one year suspension likely.

Rossi has 30 caps for Italy, and enjoyed his longest spell with a club at Villarreal, for whom he made 136 La Liga appearances over the course of six years, scoring 54 league goals.

His most recent spell at Genoa was less successful, as he only played nine appearances, scoring just one goal.