You went too soon, Gary!

Following his 'Ronaldo vs Messi' debate on Monday Night Football with Jamie Carragher, Gary Neville took to Twitter to once again express his opinion on the matter.

END_OF_DOCUMENT_TOKEN_TO_BE_REPLACED

Though Cristiano Ronaldo opened the scoring for United in the 13th minute, an Aaron Wan-Bissaka red card saw the Red Devils reduced to 10 men and after a period of sustained pressure, the home side levelled proceedings in the 66th minute courtesy of Moumi Ngamaleu.

The game was heading for a draw - which, considering the red card, wouldn't have been a bad result for Ole Gunnar Solskjær's side - before Siebatcheu scored a dramatic winner in the fifth minute of added time to secure a famous victory for Young Boys.

After Ronaldo had put the away side in front, Neville was quick to post a sarcastic video of him laughing on Twitter, accompanied by a goat emoji - seemingly taking a jibe at his MNF co-host, Carragher, who claimed that Messi was the best player out of the two.

Yet, less than two hours later and once the final whistle had gone, Neville once again posted on his Twitter account - only this time, it was a slightly less joyous reaction and one that evidently pleased an understandably smug Carragher.

On a show that featured a heated discussion on whether Ronaldo will make United a better team, the punditry duo then tackled the age-old Messi vs Ronaldo debate, with plenty of talking points to take away from their 'conversation'. 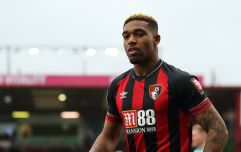 END_OF_DOCUMENT_TOKEN_TO_BE_REPLACED

Neville stated that if he needed to choose anyone in history to come off the bench with 10 minutes to go if his team needed a goal, he would pick Ronaldo, before he went on to describe him as "the greatest player who's ever lived."

The former United right-back then pointed to his goal record, highlighting the number of goals the Portuguese scores with his weak foot to back up his argument.

However, Carragher took issue with that claim, saying: "Ronaldo is not the greatest player of all time." Questioned as to who is, he gave the obvious answer: "His pal here [Lionel Messi]."

"It doesn't matter how a ball goes in the net," he added.

"Messi's got a better goal record than Ronaldo. Messi is also a playmaker, Messi can run a game.

Ronaldo can't do that. Again, not a criticism," he was keen to add.

He continued: "The stats prove Messi's got more of a chance scoring off the bench than Ronaldo.

"Messi, as a player, can take you to a place that you can't actually believe what you're seeing."

It's a debate that will never be settled, and it is probably best to avoid even having it again. However, Neville might want to wait until the final whistle before attempting to 'one up' his MNF partner next time.