Marcus Rashford could lead the line

Gareth Southgate is expected to rest all seven England players who played in the Champions League final on Saturday night for England's UEFA Nations League clash with the Netherlands on Thursday night.

Danny Rose, Trent-Alexander-Arnold, Jordan Henderson, Harry Kane, Dele Alli and Joe Gomez and Eric Dier were all in Madrid as Liverpool met Tottenham Hotspur in the biggest match in club football, and despite all being confirmed as fit by the England manager, will all be rested as Southgate is set to prioritise players with whom he has been working in the build up to this semi-final.

"I have to assess all the players who were involved in Madrid,” Southgate said.

“That was a unique game and a unique set of circumstances: whether you won or lost, the emotional and physical implications; the fact that the players only arrived on Tuesday, and there’s a lot of tactical work that has been going on."

Wanting to avoid a repeat of England's past failures when the entire team relied upon one player, Southgate is not afraid to put his faith in less experienced players with more match sharpness.

“When I took over, I remember talking about how everything had fallen on Wayne Rooney’s shoulders whenever we’d been to major tournaments. I was in Japan [in 2002] and everything was around David Beckham and whether he would be fit. We had to build a team where we weren’t reliant upon one player or a couple of players, where the burden was shared, and people carried the baton at different times. And that we had competition for places and strength in depth. Motivation comes from wanting to win, but [also from] knowing there are players who can come in and take your place. 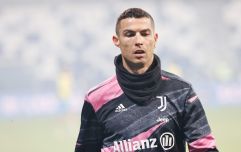 END_OF_DOCUMENT_TOKEN_TO_BE_REPLACED

“We have huge trust in all our players. I wouldn’t hesitate putting any of them in."

Marcus Rashford could lead the line with Raheem Sterling and Jadon Sancho either side of him, as Kane, who played his first match since early April last weekend, drops to the bench.

Sterling is expected to wear the captain's armband for this game after his management company issued a press release saying he would captain the Three Lions in Guimaraes.

The Manchester City player had to apologise to the manager for this episode, saying: “I woke up this morning fuming. I hadn’t had a conversation with anyone in my agency, so it was a strange one to wake up to. The first thing I saw after I came off the phone to my agent was Gareth down the hallway, and I apologised to him for what had happened. I don’t know where that came from."