Madrid have reportedly labelled it a 'scandal'

END_OF_DOCUMENT_TOKEN_TO_BE_REPLACED

The Spanish giants were originally drawn against Benfica, but an error saw Manchester United drawn against Villarreal, with further issues following as UEFA attempted to fix the issue.

As United faced-off against Villarreal in their group, they were not eligible to play them in the first stage of the knockout phase, however, their ball was subsequently not taken from their pot as a potential opponent for Atletico Madrid either.

This saw the Red Devils drawn against Paris Saint-Germain, with Villarreal facing Manchester City after the initial error.

However, following the error that caused the draw to be redone, Real Madrid now find themselves up against PSG.

The new draw will not make anyone happy (well, maybe Atletico if they don’t get drawn against Bayern again). Let’s say #RealMadrid are not pleased at all by what has happened

UEFA blames outside force for the mistake. That does not exclude them apologising, which they haven’t

END_OF_DOCUMENT_TOKEN_TO_BE_REPLACED

United are thought to have held talks with UEFA about the incident, with Atletico also complaining after they were drawn against German champions Bayern Munich.

The club's English-language Twitter account tweeted: "We are in talks with UEFA to ask for explanations and a solution after the mistakes made in the Champions League round of 16 draw." 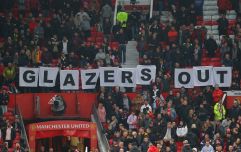 END_OF_DOCUMENT_TOKEN_TO_BE_REPLACED

UEFA admitted the error on their behalf, citing "a technical problem with the software of an external service provider that instructs the officials as to which teams are eligible to play each other".

Despite this, Real Madrid - whose draw had taken place before the error occurred - have reportedly described the decision to void the draw as a "scandal".

As per Deportes Cuatro, the La Liga leaders approached UEFA to claim it was "inadmissible" to redo the draw in full.

It was also reported that Madrid were "opposed at all times to the repetition of the draw", with Goal adding that Madrid noted that their initial draw against Benfica was confirmed before any errors occurred.

Madrid - who topped their Champions League group this campaign - were knocked out of last season's competition at the semi-final stage by eventual winners Chelsea.