Faria worked alongside Mourinho for 17 years

Rui Faria has lifted the lid on his decision to leave Manchester United in the summer, bringing to an end 17 years working with Jose Mourinho.

"It was not a decision I took overnight, it was a mature decision and I don't regret it," he says. "I felt the decision was about my family, they had been very patient with me for all these years and it was time for me to think more of them." 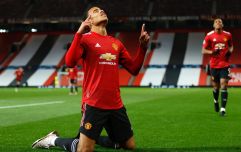 END_OF_DOCUMENT_TOKEN_TO_BE_REPLACED

Having spent nearly two years as Mourinho's assistant, Faria also reveals that he plans to go into management when he does decide to return to management.

"Being Jose's assistant for so many years, I couldn't be an assistant to somebody else," he explains. "Working with Jose is the best experience you can have. I don't think there's a manager in the world with the experience Jose has and the wisdom," he added.