Yes, the transfer window may have closed for English clubs, but we're not done yet. Not by a long way.

Although Premier League clubs aren't permitted to bring in any more players until January, they are still allowed to offload players to other European clubs. With this in mind, it now seems Danny Rose could be set for a move abroad.

END_OF_DOCUMENT_TOKEN_TO_BE_REPLACED

Rose has been linked with a move away from Tottenham after questioning their ambition in the transfer market last summer. Manchester United had appeared to be favourites to sign the left-back earlier in the year, though a move failed to materialise. The England international was also briefly linked with a switch to Wolverhampton Wanderers last week, with odds tumbling on him making a move to the Premier League newcomers.

A move abroad is Rose's only option should he wish to leave Spurs, where his playing time is expected to be limited over the season ahead if he does end up staying. As a result of this, he's been linked with transfers to two European clubs.

Bundesliga runners-up Schalke are said to have held discussions with the 28-year-old about a loan move to Germany earlier in the week. Despite this, a further report claims Rose is holding out for a move to Paris Saint-Germain. The French champions are also said to have shown interest in him as they look to bring in a new first-choice left-back. 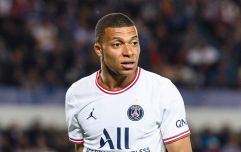 END_OF_DOCUMENT_TOKEN_TO_BE_REPLACED

popular
Amber Heard says her sister taught Johnny Depp to snort cocaine with a tampon
Martin Skrtel retires from football due to health reasons
Megan Fox reveals she 'cut a hole in the crotch' of her jumpsuit to have sex with Machine Gun Kelly
Lip readers analyse what Johnny Depp’s lawyer told him as they celebrated in court
Coca-Cola announces change to its bottles
Wagatha Christie: Wayne Rooney describes 'awkward' moment he asked Jamie Vardy to get his wife to 'calm down'
Julia Fox says Amber Heard was not 'powerful enough' to abuse Johnny Depp - and people are divided
You may also like
Sport
Lionel Messi snubbed by Ligue 1 peers in Player of the Season awards
Sport
Fans slam 'selfish' Kylian Mbappé for ignoring pass option to Lionel Messi
Sport
Lionel Messi ranked above Benzema as best performing player in Europe this season
Sport
You're Paul Pogba. Choose your next club
Sport
Antonio Conte will demand PSG double his wages, among series of bold requests
Next Page