Drinkwater 'DIDN'T HEAR ABOUT THE NEWS BEFORE HE POSTED THAT'

Make no mistake about it, this is an emotional day for all those connected with Chelsea Football Club. Frank Lampard is gone. Not dead, just sacked as manager, but given his status as a club legend, you can understand why some of the fanbase are particularly upset to seeing him turfed out by Roman Abramovich.

Not everyone, however, is that upset about it. Or at least that's how it seemed for a brief while after a quick check of Danny Drinkwater's Instagram Stories.

Within minutes of the announcement confirming Lampard's departure, the Chelsea midfielder - exiled on loan in Turkey with... *checks Google*...  Kasimpasa - posted a picture of himself back in his Leicester days, celebrating a goal.

Many interpreted the post as a thinly-veiled dig at Lampard, who clearly didn't see the 30-year-old as part of his first team plans at Stamford Bridge.

Thankfully, this was all one big misunderstanding, wasn't it? Phew! After being called lots of horrible names by disgruntled Chelsea fans on social media, Drinkwater deleted the post and followed up with a *completely believable* explanation soon after, putting the matter to bed once and for all.

'THOUGHT THAT WAS A BIT OF A STRANGE REACTION...' Drinkwater shouted. 'DIDN'T HEAR ABOUT THE NEWS BEFORE I POSTED THAT.

'I WAS JUST MISSING PLAYING. THE MANAGER WAS SOMEONE I LOOKED UP TO HUGELY AS A PLAYER.' 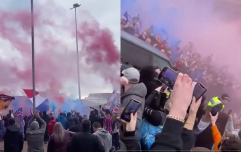 END_OF_DOCUMENT_TOKEN_TO_BE_REPLACED

So, yeah, glad he cleared that one up. We've absolutely no doubt whatsoever that Chelsea fans and everyone else will accept this explanation, apologise for those horrible names and just move on with their lives.

We look forward to seeing Drinkwater back in a Chelsea shirt under Thomas Tuchel.

popular
#ResignBorisJohnson trends on Twitter after he was found to have misled parliament
The JOE Pub Quiz: Week 233
QUIZ: Can you name England's XI from every knockout loss since 2002?
Imagining a North vs South Premier League All-Star match
YouTubers trick royal experts into commenting on Harry & Meghan interview that hasn't aired
QUIZ: Identify the clubs these Football Italia legends played for - #1
A definitive ranking of every swear word from worst to best
You may also like
Quiz
QUIZ: Name all 22 starters from the 2010 World Cup final
Sport
WATCH: Granit Xhaka reaches point of self parody with hilarious gaffe for Burnley goal
Sport
Zlatan Ibrahimović to make sensational return to Sweden squad aged 39
Sport
Crewe savagely body Liverpool in hilarious TikTok
Sport
QUIZ: Can you name all 22 starters from the 2005 Champions League final?
Next Page