Croatia beat Spain 3-2, courtesy of a stoppage time winner from Tin Jedvan. After the win, which sets up a tantalising Uefa Nations League game with England on Sunday, Lovren appeared to criticise the Real Madrid captain on a post made to his Instagram story. 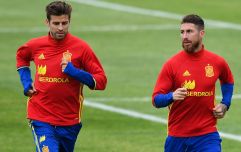 END_OF_DOCUMENT_TOKEN_TO_BE_REPLACED

'Go ahead and talk now buddy. Buddy! They are a bunch of p******,' Lovren reportedly said.

Another post on his Instagram also showed Ramos holding his head after being caught by his elbow during the game. When one of Lovren's followers asked if the incident had been a form of revenge for Mo Salah, whose Champions League final was cut short after the Egyptian injured his shoulder after a tussle with Ramos last May, the 29-year-old responded with a heart emoji. 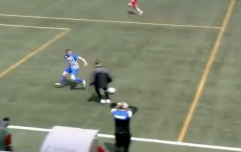 Assistant coach runs on pitch to stop opposition counter attack, gets sent off

END_OF_DOCUMENT_TOKEN_TO_BE_REPLACED

While it remains unclear whether Uefa will take disciplinary action against Lovren for his comments, Zlatko Dalic has revealed that he will be having words with the defender.

"I will talk personally with Dejan," he said ahead of the game on Sunday. "But that will stay between us and the squad. I don't want to talk publicly about this."

The game at Wembley is a League A Group 4 decider. Should England win, they will progress to next summer's finals. Victory  for Croatia, who also beat them in the World Cup semi-finals in Russia, will see them relegated from the group.

popular
Woman reveals cruel reason date dumped her after they had sex for the first time
Confusion as woman appears to fart during viral clip of Depp-Heard trial
Kylian Mbappe asked PSG to sell Neymar and replace him with Ousmane Dembele
Groom slammed for going to own wedding to bride, 16, in jeans and t-shirt
Topless mum in her undies rescues pet goose from bald eagle in crazy video
A definitive ranking of every swear word from worst to best
The never-before-seen extended version of Louis Theroux's rap has been released for the first time
You may also like
Life
Spain to welcome back unvaccinated Brits 'within days' just in time for the summer holidays
Fitness & Health
Spain set to offer three-day ‘menstrual leave’ for women every month
News
Reporter oblivious as giant inflatable penis gatecrashes live show
News
UK to be hotter than Barcelona on Friday - but heatwave won't last for long
News
Sky turns completely orange in Spain and Britain could be next
Next Page