Claude Puel has a difficult task ahead of him.

Having taken over at Leicester following the sacking of Craig Shakespeare two weeks ago, Puel has been tasked with dragging the Foxes up the table. 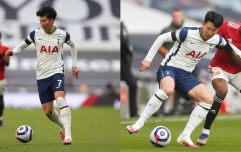 END_OF_DOCUMENT_TOKEN_TO_BE_REPLACED

Another challenge that Puel faces is trying to convince Riyad Mahrez to stay at the King Power Stadium amid interest from several clubs but the former Southampton boss has said he is confident that he will be able to "seduce" the Algeria international.

But perhaps the most challenging aspect of his new job thus far was trying to make sense of what Jamie Carragher asked him ahead of his first Premier League game in charge of Leicester.

Prior to the second Super Sunday game this weekend, Carragher visited Puel to ask him what persuaded him to take the position.

"Was it a big desire of yours to come back to the Premier League after what happened last season at Southampton?" 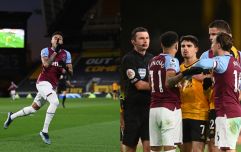 END_OF_DOCUMENT_TOKEN_TO_BE_REPLACED

It was a good question but, unfortunately, Puel had absolutely no idea what was said due to Carragher's strong Liverpool accent.

Thankfully, Thierry Henry was on hand to translate Scouse into French for Puel and get the answer ahead of Leicester's game with Everton.

Carragher, who recently claimed that the sacking of Shakespeare was "a little bit harsh", was well used to it and social media absolutely loved it.

Claude Puel after Carragher asks him a question. pic.twitter.com/xKFIOFbB5k


Thierry Henry having to translate for Claude Puel to understand Jamie Carragher... pic.twitter.com/Wjc8FlPQUm

#SaintsFC lol at Thierry Henry having to translate for Claude Puel to understand Jamie Carragher...

popular
Man faces three years in jail in Dubai for legally smoking marijuana in his own country
Comedian learns Prince Philip died while mocking him onstage
Cop who pepper sprayed Black US army officer at traffic stop fired
QUIZ: Can you get 20/20 in this desperately tricky capital cities quiz?
Why John Corbett probably isn't Jo Davidson's mystery relative in Line of Duty
Line of Duty fans think they've worked out who Jo Davidson's mystery relative is
Inhaled asthma drug 'shortens Covid recovery and could be significant for world'
You may also like
Sport
Premier League plan introduction of semi-automatic VAR to help with offside calls
Sport
Is this the hardest team ever assembled in the Premier League?
Sport
Man United appoint first Football Director and confirm Darren Fletcher role
Sport
Imagining a North vs South Premier League All-Star match
Sport
QUIZ: You have 90 seconds to answer this tricky football question
Next Page