Chelsea have informed Callum Hudson-Odoi that he will not be sold this January, after he submitted a transfer request amid interest from Bayern Munich.

The winger has attracted a lot of admirers this season, first impressing in the Community Shield against Manchester City back in August. Bundesliga champions Bayern Munich have shown the most interest in signing the winger, interest that was reciprocated by Hudson-Odoi after he found himself struggling for first team minutes and was promised Arjen Robben's number 10 shirt at the Allianz Arena.

Having seen the success of other young English talent in the Bundesliga, namely Jadon Sancho at Borussia Dortmund, Hudson-Odoi decided to hand in a transfer request to Chelsea, formally expressing his desire to leave the club this month.

The club have now stamped down their authority, refusing the request, telling the winger he will stay put until the summer at least.


Bayern had submitted bids in the region of £40m for the player, hoping that would be enough to persuade Chelsea to part with a player who does not often feature in the starting line-up. But Chelsea are determined to keep hold of the 18-year-old, presumably under the impression that more game time in the second half of the season will be enough to change his mind. 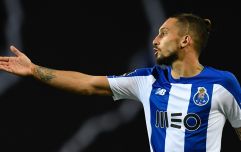 END_OF_DOCUMENT_TOKEN_TO_BE_REPLACED

The south London born forward was impressive in Chelsea's FA Cup tie against Sheffield Wednesday on Sunday, when he was granted a rare start by manager Maurizio Sarri.

Hudson-Odoi took grabbed that chance with both hands, scoring one of three goals to ensure the Blues progressed to the fifth round, when they will take on Manchester United in a repeat of last season's final.

After the game on Sunday, he was asked about his future, but replied diplomatically by saying: "I don't know, I can't say. I'll keep working hard and you never know what will happen."

And now we know.

You may also like
Sport
QUIZ: Guess the footballer from their Wikipedia page #11
Sport
Anthony Joshua and Diplo to appear as playable characters in FIFA 21
Sport
Roma fan awakes from coma after being played video message from Francesco Totti
Sport
UEFA confirm five substitutions allowed in club and national competitions this season
Sport
Liverpool assistant praises impact of 'monster' Diogo Jota in training
Next Page