On March 27, Dan Leavy posted this infectious video of himself in the Leinster dressing room with James Tracy and Luke McGrath:

Three young lads full of life and in great spirits as Leinster headed towards the business end of the season.

Three days later and Leavy was lying in a crumpled heap on the Aviva Stadium pitch. Medics and support staff rushed straight out onto the field of play and a stretcher was quickly summoned. Those unfortunate to view his injury from the Lansdowne Road end of the ground will not soon forget the image of Leavy's leg buckling.

On Monday, two days after Leinster's win over Ulster, the province confirmed a 'complex knee ligament injury'. Leavy's knee was contorted so badly that there has been significant ligament damage. SportsJOE also understands that the flanker hamstring sustained woeful damage too.

The incident occurred after 61 minutes, not long after Leavy had replaced Sean O'Brien. Ulster centre Stuart McCloskey made a carry towards the Leinster 22 with James Ryan tackling him around the legs and Leavy going high.


The Ryan-Leavy double team was an attempt to turn the ball over but Ulster props Eric O'Sullivan [1] and Wiehahn Herbst [18] affected a clear-out. What you will see below is O'Sullivan driving Leavy to his left while Herbst, by complete accident, falls onto his planted left leg.

Ulster recycle but Leavy does not move.

Leavy was not the only casualty of that absorbing Champions Cup quarter final. Ulster and Ireland captain Rory Best damaged ankle ligaments when, early in the game, he planted his feet to attempt for his second turnover of the game.

He was forcibly cleared out (is there any other way?) by two Leinster forwards but his leg was trapped in the ruck and he damaged ankle ligaments. If he plays for Ulster again this season it will be through a lot of pain.

The Leavy injury was not too far off the one that ended Paul O'Connell's career in 2015 (he retired in early 2016 after being unable to come back in order to play for Toulon). In the World Cup pool game against France, O'Connell was trying to get to carrier Guilhelm Guirado.

Both legs stretched to the limits, Pascal Pape, Damien Chouly and Wesley Fofana all combined to shunt him out of the way. The pressure told and O'Connell's hamstring was torn from the bone. 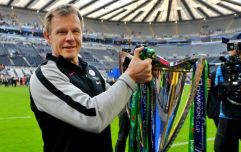 END_OF_DOCUMENT_TOKEN_TO_BE_REPLACED

"God," Keith Wood later extolled, 'I think we all need a suck of that oxygen too."

While World Rugby is taking steps to lessen injuries due to concussion and aerial tackling, the breakdown remains an absolute war-zone. It was something that was discussed in great detail, and with real empathy towards players, by James Haskell, Alex Payne and Ben Ryan on House of Rugby.

"Maybe World Rugby should start applying law," Ryan noted. "That would be a really good start."

Ryan, who led Fiji's Sevens side to Olympic gold in 2016, believes World Rugby should seriously look into removing the jackler (the player attempting to poach/turnover ball) or enforce the current rules around the breakdown. "That would be the start point for people deliberately collapsing rucks or coming off their feet," he said.

Removing the jackler would see opposition players needing to bind and look to step over the ball in order to try turn it over. This is the way rugby used to be played and not only would it keep more players on their feet, it would suck in more players into the breakdown and make space elsewhere on the pitch.

Ryan has witnessed far too many incidents - like ones that happened to Leavy, O'Connell, Jean De Villiers (below) and more - where players' knees and ankles have nowhere to go and are "exploding". 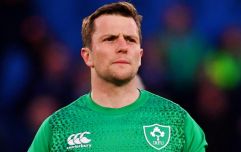 END_OF_DOCUMENT_TOKEN_TO_BE_REPLACED

Another such incident happened in France, last month, when Grenoble centre Etienne Dussarte was cleared out of the breakdown by two Perpignan players and 'severely ruptured' his cruciate ligaments (he is not expected back until early 2020, like Leavy).

When Ryan says 'apply law', he means players should be penalised for having their shoulders below hip height. He comments:

"Most players go over the ball, put their head down there and just wait for surviving the collision. And the referees, really, give the opportunity for the attackers to just smash them out of the way. If they don't survive that, the just go on playing and if they do survive, refs generally give the penalty.

"The best way to be able to get someone, who is effectively sealing off the ball defensively - and there is no room underneath - is either turning, or judo-rolling, him or just blunt-force trauma and smash him off it, neither of which are legal."

Haskell contends that it was easier and, to his mind, safer to get jacklers off the ball with a neck roll. That practice is now heavily penalised.

'One man, one bullet'

"The breakdown is a massive element of training every week," says Haskell. "It doesn't matter how you dress it up. Every talk... if you are doing your three key points (ahead of a game), it might be kick-chase, making sure we are not over-committing defensively into the breakdown, and the breakdown.

"So, every week we would practice - in units - a combination of jackling, bouncing back to your feet, surviving the catch (or choke) tackle and work on the floor - the double roll, the squeeze ball...

Ryan and Haskell would both be open to widening the 'gate' of entry into the breakdown so that tacklers (and jacklers) can be shifted at angles rather that head-on.

The breakdown, Ryan argues, needs sorting as 'all it does is reward and lack of skill and thinking, and (is) just blunt-force power and trauma'.

Haskell and Ryan are both pleased that World Rugby has made commitments to looking at how to properly police the breakdown, again, but it has come too late for the likes of Leavy and Dussarte.

YOU CAN CATCH THE FULL BREAKDOWN DEBATE FROM 9:00 HERE:


popular
The JOE Friday Pub Quiz: Week 199
Here's how to recover all your deleted Facebook photos and messages
A definitive ranking of every swear word from worst to best
Here's how to see who's been taking screenshots of your Instagram Stories
Who is the most handsome footballer in the Premier League?
PlayStation and Xbox users will now be able to play against each other online
Every Succession character ranked from worst to best

You may also like
Life
The ultimate guide to learning Irish slang
News
Mary Lou McDonald: It's time for a united response to Covid-19
Music
KNEECAP answer the most annoying questions Irish people get asked
Politics
What does a Tory landslide mean for the future of Northern Ireland?
Football
What is Glenn Whelan? An endangered species fact file
Next Page