Watch PMQs LIVE: Theresa May faces Jeremy Corbyn before dashing off to Brussels

Theresa May will jet across the English Channel this afternoon for a summit with leaders of the European Union's other 27 member states.

At that meeting in Brussels, the length of a second extension to the UK's withdrawal from the EU will be decided.

For all the backbench legislation, posturing by the Tory hard right ERG and cross-party talks with Labour - it is only the EU Council summit that has the power to grant an extension.

#PMQs LIVE: Jeremy Corbyn shouts at Theresa May before she heads to Brussels to be shouted at by the EU https://t.co/3s4kMMxoBc


Delicious irony, for a vote about taking back control and parliamentary sovereignty. Particularly because it is French president Emmanuel Macron playing the strong man. In his customary pre-meeting letter to leaders he warned against "humiliating" the UK and Theresa May. 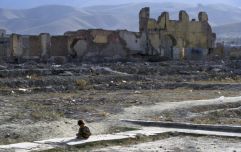 The child refugee separated from his only living family member

END_OF_DOCUMENT_TOKEN_TO_BE_REPLACED

Oh, and across the road from where the meeting will take place at around 5pm, scientists are expected to reveal the first ever picture of a blackhole.

But before all of that - Prime Minister's Questions.

Last week, Jeremy Corbyn opted not to attack the prime minister for the Brexit catastrophe. Considering they were about to commence talks, it would have made for a frosty bourbon and latte.

The same could be said of today. Once May is finished on the continent, talks resume with Corbyn tomorrow.

You may also like
Politics
What does a Tory landslide mean for the future of Northern Ireland?
Politics
Drillminister has a warning for our new prime minister
Politics
Is the United Kingdom now a right-wing country?
Politics
How the Tories took over a northern Labour safe seat
News
Meet the election candidate who changed his name to Brexit
Next Page