'It's a matter of opinion'

A Conservative backbencher has claimed that "carnage" on UK roads is killing more people than Covid, and here's the shocker, he couldn't be further from the truth.

Sir Desmond Swayne, who is no stranger to controversy, spoke to his colleagues in the Commons on Tuesday in relation to new Covid measures.

Conservative MP Desmond Swayne says the “carnage” on UK roads is “certainly killing more people than Covid at the moment”.

For context there were just 1,460 deaths on British roads in the whole of 2020, compared to more than 4,000 deaths of people with Covid last month alone. pic.twitter.com/NVD6SxhTKB

The MP, who voted against such measures, told the Commons: "In the end, it comes down to a matter of opinion - a matter of our prejudice - and we are typically capable of organising our lives and making those decisions for ourselves. 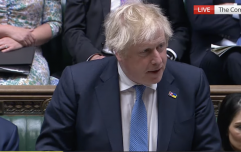 END_OF_DOCUMENT_TOKEN_TO_BE_REPLACED

Tories are born with something missing, other than a heart and soul that is, this oik proves it🙄😵‍💫 https://t.co/qgp0KlsIeZ

While Swayne claims it's a matter of opinion, the facts and figures laid out by his Government in September paint a very different picture.

END_OF_DOCUMENT_TOKEN_TO_BE_REPLACED

Yet the latest annual statistics on reported road casualties, published by the government in September, paint a different picture to the one offered up by Mr Swayne.

He should be brought back to parliament to apologise and put the record straight.what’s the point of parliament if it’s just lies they tell https://t.co/paBL4tXB8a

Covid however has claimed 69,771 deaths in England and Wales alone, reports the Office for National Statistics (ONS).

People have begun reacting to the claim online after Byline Times reporter Adam Bienkov shared the statement on Twitter.

Another said: "Mr speaker, here's another lie in parliament you can ignore, oh my bad…you have!"

It seems like in this instance, the only car crash relevant is Swayne's research capabilities.

popular
Ex-teacher who got pregnant by former student plans to film birth so it can be taught in schools
Landlord faces £40k fine after tenant puts swimming pool on roof of flats
James May 'hospitalised after crashing into wall at 75mph filming new show'
Lisa Kudrow hits back at fans complaining about lack of diversity in Friends
Robin Williams' wife shares reason why he killed himself
Furious Reading and Leeds ticketholders demand refunds as band replaces Rage Against The Machine
The JOE Friday Pub Quiz: Week 307
You may also like
News
Scientist have been able to pinpoint where covid-19 actually came from
Sport
Unvaccinated England players set to avoid covid quarantine at World Cup
Sport
Premier League clubs to consider segregating players based on vaccination status
News
Brits might have to go back to wearing masks, health minister warns
News
Covid cases could soon 'exceed 300,000' a day thanks to BA.5 strain
Next Page