Nigel Farage tells Question Time Leave was a vote for no deal, not Norway, despite video of him arguing opposite

On the same show, no less

It got quite, heated.

The Brexit party leader said the referendum vote was a vote to leave the single market and customs union, despite having endorsed Norway's EU relationship in the past.

Norway is part of the European Economic Area, providing access to the single market but means the country is not in the customs union.

Nigel Farage, the past: pic.twitter.com/04p29V8qNm

However, in this Question Time appearance, Nigel said he was in favour of adopting World Trade Organisation trading arrangements - a no deal outcome. 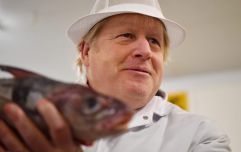 END_OF_DOCUMENT_TOKEN_TO_BE_REPLACED

Soubry: "These are the lies and the spin."

Soubry: "I'll tell you why. Nigel Farage was criticising the return of a customs union and regulatory alignment, in 2015 he was arguing for exactly the same thing."

Farage: "What are you talking about? I've always said no deal is better than a bad deal, I argued it all the way through the referendum Anna. Day, after day, after day. You clearly weren't listening."

Soubry: "People were told we wouldn't leave unless a deal had been done, that's what we were promised."

I hope that's cleared everything up for you, nice and crystal clear.


popular
QUIZ: Identify the brand from just its slogan
Here's the full list of McDonald's reopening this week
The JOE Friday Pub Quiz: Week 193
21 British game shows ranked from worst to best
Here's what they don't tell you about being a contestant on Pointless
Boris Johnson challenged to say 'Black Lives Matter' in parliament
WATCH: Muhammad Ali's perfect reply to being told 'not all white people are racist'

You may also like
Entertainment
Does Normal People really live up to the hype?
Entertainment
David Attenborough to teach BBC geography classes for children at home
Entertainment
Watching Only Fools and Horses for the first time
Entertainment
Top Gear's guide to dealing with bad drivers
Entertainment
Every character on The Catherine Tate Show ranked from worst to best
Next Page