Boris Johnson 'faces £10,000 in Partygate fines' as PM expected to be quizzed by police

Boris Johnson could reportedly be in line for £10,000 in 'Partygate' fines, a barrister has suggested.

END_OF_DOCUMENT_TOKEN_TO_BE_REPLACED

Adam Wagner, an expert in Covid laws, said the PM could be slapped with a massive bill if Scotland Yard find lockdown regulations were broken at gatherings he attended.

Wagner told BBC Radio 4's Today programme on Thursday that fixed penalty notices were the most likely penalty, "which can be issued when the police reasonably believe a person has committed a criminal offence".

The claim comes as police confirmed they will quiz more than 50 people over rule-busting parties.

The Metropolitan Police said "formal questionnaires" will be sent out in the coming days asking party-goers for "an account and explanation" of 12 events during the pandemic. 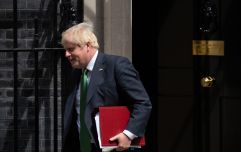 END_OF_DOCUMENT_TOKEN_TO_BE_REPLACED

Johnson is believed to have attended six events, including a BYOB drinks do in the Downing Street garden, a party in his No11 flat, and a birthday gathering in the Cabinet room.

The force on Wednesday said it is also reviewing its decision not to investigate a Downing Street Christmas quiz in December 2020 after the Mirror published a photo from the event showing Johnson next to a bottle of champagne.

Wagner said: "There were 12 gatherings being investigated; the person we know was probably at six was the Prime Minister.

"So if he was given a fixed penalty notice for each and every one those, I think that he would be given those sort of cumulative amounts until eventually the final one would be £6,400.

"So overall, and assuming there isn't a big £10,000 one for hosting a gathering in the flat of over 30 people, he could still be in line for over £10,000 worth of fixed penalty notices if they accumulate".

popular
Moment Jake Paul ends up in dramatic fight with YouTuber in club
Landlord faces £40k fine after tenant puts swimming pool on roof of flats
Bulgarian mystic who correctly predicted Princess Diana’s death and 9/11 sees 2022 prophecy come true
Man United have 'decided to sell' promising midfielder James Garner
Graeme Souness 'doesn't regret a word' of 'man's game' comments that sparked sexism row
Graeme Souness under fire for calling football a ‘man’s game' while sat with Karen Carney
Incredible case of the only known individual whose parents were two different species
You may also like
Life
Boris and Carrie put south London home on the market for £1,600,000
Politics
Can you guess the real names of these UK politicians?
Sport
Calls for a Bank Holiday following Lionesses EUROS win
News
Nadine Dorries criticised for retweeting image showing Boris being stabbed in back
Politics
Stanley Johnson snaps after Boris is called 'a liar' live on TV
Next Page