It appears to be spreading fast, with people taking days to recover

A new strain of super-flu has left hundreds of people floored and unable to shift its symptoms for days on end - and no, it’s not Covid.

Cressida Dick: All the times the Met Police boss got it wrong

END_OF_DOCUMENT_TOKEN_TO_BE_REPLACED

Starting primarily in the south before spreading up towards the north of the UK, a new bug that has been labeled the ‘worst cold ever’ has left countless incapacitated, feeling drained and plagued with coughing fits.

Other reported symptoms include a runny nose and generally feeling pretty terrible, says The Sun.

One sufferer took to Facebook to share news of her illness, saying: "Two weeks now and it's not funny at all. First cold I've had in years and it's floored me."

Meanwhile another complained about the ongoing impact it was having on their day-to-day life: "I've had a terrible cold for nearly three weeks, can't seem to get rid of it."

Most who fall ill with this mega-cold have also tested negative for Covid-19 and the highly-transmissible Delta variant. However it might not come as too much of a surprise to discover that the root cause of this sudden surge of the lurgy does have links that trace back to the pandemic.

After spending the majority of the past few months confined to our houses, most people have lost the bulk of their immunity to common colds and the flu.

As the world starts to open back-up and large groups of people begin to mix once more, the usual winter infections that we’ve been able to deal with for so long have suddenly gained an advantage over our immune systems. 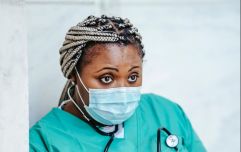 END_OF_DOCUMENT_TOKEN_TO_BE_REPLACED

London-based GP Dr Philippa Kaye explained the situation in more detail to the BBC: “We are mixing in a way that we haven't been mixing over the past 18 months.

"During those first lockdowns, we saw numbers of other [non-Covid] infections fall. We think that that was primarily due to the restrictions on meeting up."

She added: "We've actually been seeing a rise in the number of coughs and colds and viral infections.”

Despite increased reports of this new strain of flu, it’s important to remember that the Delta variant also makes itself known via the same symptoms.

So if you’re feeling under the weather, make sure you play it safe by getting a PCR test and avoiding any unnecessary contact with the public or work colleagues.

popular
Dr. Dre shares unbelievable video of Eminem's skills to prove no rapper could beat him
'He completely satisfies me' - wife of disabled man hits back at trolls mocking sex life
Man tracked down and killed son's paedophile abuser live on TV
'Hey kiddo! This is your uncle ' - creepy moment OnlyFans star's relative finds her page
A definitive ranking of every swear word from worst to best
Former army sergeant who became porn star explains why she made career move
Elon Musk offers kid $5k to take down Twitter account tracking his plane
You may also like
News
Kobe Bryant and daughter Gianna immortalised in statue at helicopter crash site
Entertainment
Spotify to pull Neil Young music after he slammed Joe Rogan podcast
News
'Time traveller from 2714' reveals when the zombie apocalypse will take place and how it begins
News
Why dogs are getting sick and symptoms owners should look out for
News
World's fattest cat on mission to lose weight after trolls hit out at owners
Next Page