In a moment not too dissimilar to the on-air antics that often happen here in the UK, a Spanish news reporter found himself flanked by a tourist carrying an enormous inflatable penis whilst on live telly.

END_OF_DOCUMENT_TOKEN_TO_BE_REPLACED

This incredibly embarrassing moment was captured on TVE, a state-owned broadcasting channel in Spain. Journalist Lluis Mestres was reporting on Operation Easter Exit, a max exodus of 14.3 million vehicles on a weekend mini-break - but the spotlight was stolen by arguably a bit of a c**k up.

Standing outside Palma airport in Mallorca, hustling tourists can be seen behind Mestres. As the report continues, you'll struggle to keep your attention on the host as a huge bright pink penis enters the shot.

The two women carrying the impressive inflatable then notice the news reporter and divert their route - but still, considering what they are carrying, both women seem entirely composed as they stroll through the camera shot.

END_OF_DOCUMENT_TOKEN_TO_BE_REPLACED

Hopefully, after going viral, the woman will come forward and tell her story. Seriously, we need to know.

On-air blunders and mishaps have always been popular but the top spot will always be the moment Professor Robert Kelly was interrupted during a BBC broadcast by his children and his wife, who hurried in to collect the rugrats.

Now they are on lockdown in South Korea, how is he coping working from home?https://t.co/RCHkWHj3D8 pic.twitter.com/q8tA9pkp35 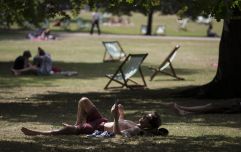 END_OF_DOCUMENT_TOKEN_TO_BE_REPLACED

"... I think one of your children has just walked in," the journalist told Kelly, who swung his chair around to find his daughter. Moments later, his other baby glides into the room in a walker. Kelly handled the whole thing like a pro but still - the video is widely shared on the internet to this day.

popular
R Kelly will probably die behind bars after being handed 30 year prison sentence
Bette Midler wants the US to ban Viagra because it’s ‘God’s will’ to have a ‘limp d**k’
Fans shocked after Machine Gun Kelly smashes glass on his face during performance
Travis Barker’s daughter shares picture of Blink-182 star in hospital bed - tells fans to ‘send your prayers’
British teen says she was raped in Majorca hotel by 'famous actor and musician'
Police hunt for two 'laughing' men who kissed three-year-old girl in front of distressed mum
July heatwave: When to expect hot weather and how long it will last
You may also like
Life
Brits could face huge fine for weeing in the sea in Spain
Sport
Elche striker posts awkward goodbye to club despite having contract renewed
Sport
Real Oviedo players thought they reached play offs before being told they hadn't in cruel prank
Sport
Spanish TV say Mbappe will 'never be a man' after snubbing Madrid for money
Sport
Gerard Pique secretly sent voice note from Sergio Ramos to Spanish football president
Next Page