Multiple people have been shot at a New York City subway station in Brooklyn as a hunt is reportedly underway for a suspect.

AP reported that five people had been shot during Tuesday morning rush hour, around 0830 local time (1330 GMT), but authorities are yet to confirm this.

END_OF_DOCUMENT_TOKEN_TO_BE_REPLACED

Photos from the scene on social media show several bloodied passengers lying on the floor of the station and blood inside carriages.

New York City police said they were responding to reports of people wounded either by gunfire or an explosion.

Police later said there are no active explosive devices inside the station.

In regard to the multiple people shot at the 36th Street subway station in Brooklyn, there are NO active explosive devices at this time. Any witnesses are asked to call @NYPDTips at #800577TIPS. Please stay clear of the area. More provided information when available. pic.twitter.com/8UoiCAXemB 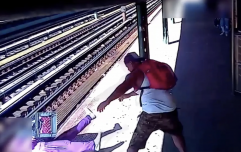 END_OF_DOCUMENT_TOKEN_TO_BE_REPLACED

One eyewitness, named Clair, told the New York Post she "lost count" of how many rounds of bullets were fired.

“There was like, lots of them. I don’t even know how many," she said.

Clair claimed the man who was wearing the mask dropped "some kind of cylinder that sparked at the top".

She added: “I thought he was an MTA worker at first because I was like, I didn’t like pay too much attention.

"You know? You’ve got the orange on."

A spokesman for New York City Mayor Eric Adams called on New Yorkers "to stay away from this area for their safety and so that first responders can help those in need and investigate".

Trains servicing that station were delayed during the morning commute. At least four train lines are also said to be delayed in both directions and officials have warned residents to avoid the area and expect delays.

The suspected gunman remains on the loose.