A man in the Irish city of Cork was forced to contact police this weekend after his housemates refused to stop having house parties despite the ongoing pandemic and public health restrictions. 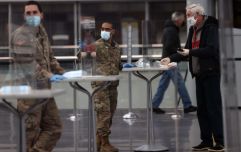 END_OF_DOCUMENT_TOKEN_TO_BE_REPLACED

The news broke on RTÉ Radio 1 as reporter Brian O’Connell went out on the beat with Garda Paul Drommey and Garda Ruth Maher in Cork as they conducted patrols.

They responded to a call about a house party in The Lough area of the city.

The call was made by one of the tenants of the house and Gardaí discovered a house party ongoing in the property, with fines issued to the organiser and the attendees.

"We've spoken to the lady in question and she's admitted that she did organise the house party and she's going to be issued with a €500 fine, " Garda Dromney said after the incident.

The tenant who alerted the Gardaí said this wasn't his first option and he'd made numerous attempts to try and convince his housemates to stop having parties.

"One night there was 20 people and the size of this place," he said.

"People pushing past and coughing up on you. They are all drunk and then what you have then is, 'sorry, sorry, sorry it won't happen again' but the next night there's a party again. The very next night."

END_OF_DOCUMENT_TOKEN_TO_BE_REPLACED

He said there was a complete lack of "respect" to be having the parties in "the middle of a Level 5 lockdown".

Last week, Irish police revealed more than 3,500 fines had been issued for breaches of the public health regulations and that last weekend alone, 150 fines had been handed out due to house parties.

popular
Netflix broadcast someone’s phone number in Squid Game and she got ‘4,000 calls a day’
Salt Bae customers disgusted at price of steak in his London restaurant
Lionel Messi scores his first PSG goal in spectacular style
Grimes says she's starting a 'lesbian space commune' after Musk split
Kevin De Bruyne escapes red card for late tackle and Man Utd fans are fuming
Why Inter Milan had to remove snake from away kit for Champions League tie
Haunted house actor stabs 11-year-old with real knife
You may also like
Sport
Thomas Tuchel says it's not his place to tell players to get vaccinated
News
Nicki Minaj hits back at Boris Johnson's Covid briefing diss
News
Masks might be legally mandated again, Sajid Javid announces
News
Premier League to tell fans to 'stay away' unless they're double-jabbed
Life
Unvaccinated TikToker begs people to get the vaccine in final video before she died
Next Page