More than 40 protestors are blocking two roads to the port

Insulate Britain campaigners have blocked roads to the Port of Dover this morning (September 24) as they continue their calls for the government to insulate homes across the UK to cut climate emissions.

END_OF_DOCUMENT_TOKEN_TO_BE_REPLACED

Vehicles attempting to cross the Channel have now found themselves stuck in queues around the port.

Two groups of protestors have blocked the A20 at the Eastern Docks roundabout and near the junction with Union Street for the Western Docks, with the group calling for a "Churchillian response" to tackle the climate emergency and fuel poverty in the UK.

A statement from Insulate Britain on Friday says: "This morning over 40 people that have been involved in Insulate Britain’s 10 days of motorway protests blocked Europe's busiest ferry port, the Port of Dover.

Disruption is the only way to draw attention to ill health & early death as a result of #FuelPoverty pic.twitter.com/ikGqZw87Ey

"Two groups have blocked the A20 at the Eastern Docks roundabout and near the junction with Union Street for the Western Docks."

A spokesperson for the group said: "We are sorry for the disruption that we are causing. It seems to be the only way to keep the issue of insulation on the agenda and to draw attention to how poorly insulated homes are causing ill health, misery and early death for many thousands of people.

"We are failing the country’s cold hungry families and the elderly and placing an enormous burden on the NHS."

The group say that insulating "our leaky homes is one of the most cost-effective ways to reduce carbon emissions" and that doing so is a "no-brainer."

"We need a Churchillian response: we must tell the truth about the urgent horror of the Climate Emergency," the spokesperson said. 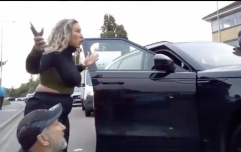 END_OF_DOCUMENT_TOKEN_TO_BE_REPLACED

They add that 9.5 per cent of households in Dover are living in fuel poverty.

A statement on the port's website reads: "Port of Dover confirms protesters are currently blocking the entrance to the Port.

"Please allow extra time for your journey and check with your ferry operator for updates. The Port remains open."

It's after an official injunction was granted against the climate activists for their blocking of the M25, meaning activists could face imprisonment for their actions.

popular
Mum who drove into Insulate Britain in rage says 'I just gave them a nudge'
Passengers who allegedly filmed rape of woman on train unlikely to be charged
Lazio suspend falconer after video emerges of him cheering Mussolini
Family of the Newcastle supporter who collapsed issue statement on his condition
Watford staff unhappy with Ben Foster's commitment to vlogging on club time
Everton footballer has bail extended until January
Cold War Steve: How the Banksy of Twitter turned Covid angst into art
You may also like
News
Insulate Britain protestor tied to railing with own banner by angry driver
News
Pub landlords warn of up to 10% pint price increase
News
CCTV images ‘show Amess murder suspect hours before attack’
Entertainment
Mindhunter director tells fans to 'make noise' to get season three made
News
England receive stadium ban from UEFA following Euro 2020 final debacle
Next Page