Their titles will be redistributed

Prince Harry and Meghan Markle have told Queen Elizabeth they will not be returning as working royals.

Buckingham Palace issued a statement, confirming conversations had taken place between the Queen and her grandson, concluding that it would not be possible for them to return after stepping away from public life.

The statement read: "Following conversations with The Duke, The Queen has written confirming that in stepping away from the work of The Royal Family it is not possible to continue with the responsibilities and duties that come with a life of public service.

"The honorary military appointments and Royal patronages held by The Duke and Duchess will therefore be returned to Her Majesty, before being redistributed among working members of The Royal Family. 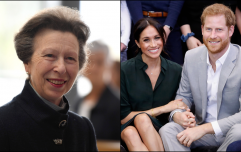 END_OF_DOCUMENT_TOKEN_TO_BE_REPLACED

"While all are saddened by their decision, The Duke and Duchess remain much loved members of the family."

A spokesperson for Harry and Meghan said: "As evidenced by their work over the past year, the Duke and Duchess of Sussex remain committed to their duty and service to the UK and around the world, and have offered their continued support to the organisations they have represented regardless of official role.

"We can all live a life of service. Service is universal."

popular
A definitive ranking of every swear word from worst to best
TOWIE star Mark Wright is officially the worst player on FIFA 21
Donald Trump's star 'to be permanently removed' from Hollywood Walk of Fame
'That Vegan Teacher' banned from TikTok after 20,000 people sign petition to remove her
Man Utd youngster Shola Shoretire released by Man City for training with Barcelona
Ex-Atalanta and Ivory Coast player Willy Braciano Ta Bi dies aged 21
PlayStation and Xbox users will now be able to play against each other online
You may also like
Life
Harry and Meghan pay for repairs at Texas women's shelter damaged by snowstorms
News
Harry and Meghan are expecting their second child
Entertainment
Prince Harry and Meghan Markle sign multiyear deal with Netflix
News
Prince Harry and Meghan Markle tell UK tabloids they are ending all co-operation with them
Football
DIRTY HARRY: Prince set for Royals exit as contract talks break down
Next Page