The skull is in near-perfect condition

Scientists have revealed that a colossal 93-million-year-old crocodile recently found in Central Queensland had eaten a baby dinosaur before its death. 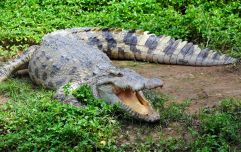 END_OF_DOCUMENT_TOKEN_TO_BE_REPLACED

The crocodile's official name is Confractosuchus Sauroktonos which is a mouthful but translates to "broken crocodile dinosaur killer", which seems to fit perfectly given its eating habits.

The word "broken" has been included in its name in tribute to the huge shattered boulder from where the fossil was discovered.

Scientists at ANSTO and @UniNewEngland have used nuclear techniques to shed light on the feeding habits of a 93 million-year-old crocodile that devoured a juvenile dinosaur based on fossilised stomach contents found in Central Queensland. 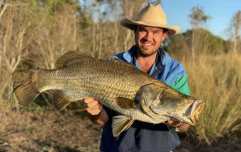 END_OF_DOCUMENT_TOKEN_TO_BE_REPLACED

It's believed that the croc grew to around 2.5m (6-8ft), according to a study published in the journal Gondwana Research.

Early studies of the remains in 2010 detected bones belonging to a small chicken-sized dinosaur in the animal's gut, believed to be part of the ornithopod family that typically grazed on plants. Other members of the family include iguanodon, parasaurolophus and Zalmoxes.

Scientists say that a "staggering" 35 per cent of the creature was preserved. This included a "near-complete skull" that showcased the creature's impressive set of teeth. It's believed that the crocodile was caught up in a megaflood, buried and died shortly afterwards.

Joseph Bevitt, a co-author of the study, said: "In the initial scan in 2015, I spotted a buried bone in there that looked like a chicken bone with a hook on it and thought straight away that it was a dinosaur.

While this species is relatively small, other ancient crocs grew over 35ft/Via Unsplash END_OF_DOCUMENT_TOKEN_TO_BE_REPLACED

"Human eyes had never seen it previously, as it was, and still is, totally encased in rock."

Technological growth meant researchers could now create high-quality 3D scans of the creature and use specialised X-ray imaging to determine more details. Currently, researchers say there is evidence of oral processing, which is a fancy way of saying it knew to break down prey before swallowing.

Such theories include dismemberment and bone fragmentation of the prey, which is similar to how crocodile's hunt today.

On average, saltwater crocodiles can grow up to 17 feet long/Via UnSplash

Dr Bevitt explained: "The fossilised remains were found in a large boulder. Concretions often form when organic matter, or say a crocodile, sinks to the bottom of a river. Because the environment is rich in minerals, within days, the mud around the organism can solidify and harden because of the presence of bacteria."

popular
Men with ‘very large penises’ wanted for new documentary
Brit on holiday beaten with a brick by gang before being thrown in the sea unconscious
Towie’s Yazmin Oukhellou and Jake McLean had ‘furious row in Turkish club’ minutes before horror crash, report claims
Premier League player arrested on suspicion of rape facing two more allegations
British schoolboy breaks internet after attending prom in sequined tuxedo ballgown
July 4 shooter: Chicago suspect fled the scene in women’s clothes and planned attack for weeks, police say
Dad who ran off with Ukrainian refugee says couple are doing 'brilliantly' - but he can't see his kids
You may also like
News
Biggest saltwater croc in captivity died of 'stress' after 'eating schoolgirl'
News
Steve Irwin's son forced to abandon enclosure after nearly being eaten by enormous croc
News
Brit mauled by crocodile speaks out from hospital bed
Life
Watch a devilish crocodile sneak up on a couple of swimmers in hotel pool
News
Woman couldn't save her friend from crocodile attack after late night swim
Next Page