Paul Pogba's transfer deal (back) to Manchester United was a game-changer in more ways that one...

It's the most expensive transfer signing in world football. It's the prodigal son returning to help his former side reclaim former glories. It's an English club nabbing one of the best ten footballers in the world. 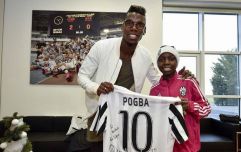 END_OF_DOCUMENT_TOKEN_TO_BE_REPLACED

It's a pretty big deal. Made even better by having the new signing announced by STORMZY of all people.

Having the world's most expensive footballer announced by a grime artist is a far cry from the days of a pitch unveiling and waving around a scarf. It's a sign that football's entering a new era, so its to be expected that a few places are doing their best to help everyone catch up.

This week saw The Times try their best to explain who Stormzy is to any customers reading up on the Pogba deal.

Their efforts to explain what the Shut Up MC is rapping about in the new adidas promo just might be the best side story to a transfer deal ever.

The Times has bravely attempted to explain to its readers what Stormzy's rap lyrics mean. https://t.co/3clhaBLDZk pic.twitter.com/GakUuEAZmQ

The Times' flair for a well-researched story is on display here as all the Rap Genius-style translation checks out. There's even a lovely clarification about who Stormzy is referring to when he refers to "his city". 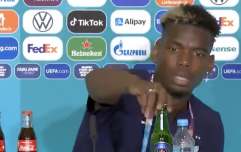 END_OF_DOCUMENT_TOKEN_TO_BE_REPLACED

They've done a bang-up job really. Which is only right, because now Pogba's got a music video, we want more big names to be announced by grime artists.

Lethal Bizzle is an Arsenal fan. Could Puma get him to announce Lacazette if Wenger wants him?

popular
Here we go again - the government says book your Xmas party. What's 'Plan B'?
Matt Lucas hits back at outrage over 'offensive' Bake Off German accent
Gordon Ramsay's daughter Tilly calls out radio host for 'fat shaming' her live on air
Mum who drove into Insulate Britain in rage says 'I just gave them a nudge'
Watford staff unhappy with Ben Foster's commitment to vlogging on club time
Passengers who allegedly filmed rape of woman on train unlikely to be charged
Sainsbury's is selling pigs in blankets sushi for Christmas and the internet is divided
You may also like
Sport
Paul Scholes says Paul Pogba is a "daydreamer" and Fred and McTominay are "limited footballers"
Sport
Paul Pogba gives passionate dressing room team talk during France Nations League win
Sport
Paul Pogba dragged down the tunnel after mocking West Ham fans
Sport
Paul Pogba considering extending Man Utd stay
Sport
'Everybody saw it' - Ruben Neves angry at ref's failure to give foul against Paul Pogba
Next Page