The ambulance reportedly arrived at the supermarket with its blue lights flashing, having presumably used them to cut through traffic

Okay, we'll level with you: there was a time, not even a week ago, where we thought we'd heard the most ridiculous 'news' story we'd hear all year. It turns out we were wrong - police being called out to an illegal rave, only to find out it was a group of pensioners, patiently queuing up for their vaccines, has already been outdone thanks to a tweet from Greater Manchester Police.

Posted on Wednesday night, it explains how - and prepare yourselves, because this is a lot to take in - police tracked down an ambulance after it was seen arriving at Harpurhey Asda with its blue lights flashing, only for a family to get out and proceed to head into the store to do their big shop.

The ambulance is believed to have been bought second-hand, GMP say. The driver, who was found to have been disqualified from driving and wanted by the court, was arrested and immediately taken into to custody (not like they were doing anything to draw attention to themself, is it?)


This Ambulance was reportedly carrying a family when it arrived at #Asda Harpurhey with blue lights flashing. Occupants promptly went inside to do their shopping. Our divisional colleagues tracked them down & the driver was found to be disqualified & also wanted by the court. pic.twitter.com/re35wnlYTc 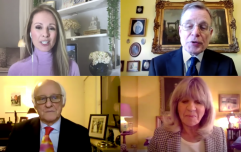 END_OF_DOCUMENT_TOKEN_TO_BE_REPLACED

If it wasn't so very obviously illegal and a really, really stupid thing to do, we'd *almost* have a tiny grain of admiration for the sheer audacity of thinking this was an acceptable way of beating the traffic.

Stop this country. We want to get off.