Boris Johnson followed up Number 10's change in slogan on the coronavirus from Stay Home, Protect The NHS, Save Lives to Stay Alert, Control The Virus, Save Lives with a Sunday evening statement that itself was criticised for lacking clarity.

Johnson and his colleagues had been criticised for the meaningless new slogan over the weekend, with many fairly asking the question: What does 'stay alert' actually mean in the face of an invisible virus?

All would become clear, it was suggested, when the prime minister delivered his announcement on Sunday. That was not necessarily the case.

The PM was once again vague on how necessary it is for people to work from home, saying essentially that if you can you should, if you can't, then don't, but if you do have to go to work, avoid public transport.


What he did announce was an extension to the amount of exercise people can now do, with the one daily outing for exercise regulation scrapped in favour of 'unlimited' exercise. 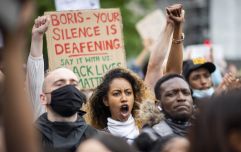 END_OF_DOCUMENT_TOKEN_TO_BE_REPLACED

What it amounted to was at best lots of words, with little substance and at worst, an announcement some critics feel was the green light for lower income workers to risk their lives by going to work in non-essential jobs while the middle class remain at home.

Is that it Boris?

After much hype, the prime minister's comprehensive road map out of lockdown = longer walks in the park. #BorisSpeech pic.twitter.com/dtgsoU8ffq

You may also like
News
Boris Johnson challenged to say 'Black Lives Matter' in parliament
News
American policeman speaks out against aggressive cops
News
Donald Trump: Authoritarian reaction leaves many in US worried
Comment
We should take pride in a new generation of black footballers addressing racism
News
Is it time for Clap For Carers to end?
Next Page