What is the most embarrassing, most cringe-worthy thing you can think of? Don't care what you've said, this is worse.

In case you don't know who Ben Shapiro is, he's a right-wing commentator and founder of conservation opinion site The Daily Wire. He is also definitely not someone who should ever try to read out Cardi B lyrics.

But that's what he did on Monday's edition of his podcast The Ben Shapiro Show, dramatically reciting the rapper's latest song, 'WAP', in an effort to show his moral disgust at women being in control of their own sexuality.

In case you need context, here is the original, and in my humble opinion much better, version 'WAP'. 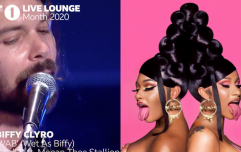 END_OF_DOCUMENT_TOKEN_TO_BE_REPLACED

What's your favourite bit? I think mine is when he clarifies that "P-word is female genitalia".

"This is what feminists fought for," Shapiro rants after his virtuoso acapella performance.  "This is what the feminist movement was all about, and if you say anything differently it’s ’cause you’re a misogynist, see?"

Cardi B released 'WAP', featuring Megan Thee Stallion on Friday, and it instantly took the internet by storm. The music video, which features cameos from the likes of Kylie Jenner, has already had 66 million views on YouTube.

Obviously, the Ben Shapiro clip has been widely mocked online.

Ben Shapiro has a reaction video crying about the new single WAP by Cardi B ft. Megan Thee Stallion and his reaction is basically this pic.twitter.com/Dhgw4RcKjn

Cardi B herself even commented on the madness.

"I can't believe conservatives soo mad about WAP," she said in a tweet when Shapiro began trending on Twitter.

'WAP' debuted at number one on the global Apple Music charts, and the US Spotify charts.

Shapiro is not the only right-wing figure to get in a fuss about 'WAP' however. California Republican congressional candidate James P. Bradley tweeted "The #WAP (which I heard accidentally) made me want to pour holy water in my ears and I feel sorry for future girls if this is their role model!"