The majority of us have been there, we've tried our best opening phrases, coming up with lines and lines of script but at the opposite end, they don't take any notice. 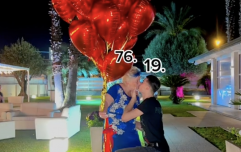 END_OF_DOCUMENT_TOKEN_TO_BE_REPLACED

We don't want to just go with the classic 'hey' or 'how are you?' but the other way hasn't been working for us either.

The women behind Tinder have decided to take matters into their own hands and have introduced Tinder Reactions which they feel is a fresh way for people to talk and gives people a higher chance of continued interaction after a match.

According to the Huffington Post, the new feature is more fun and you can basically give people a digital thumbs up or down with a selection of animated gifs, so they are left to know where they stand.

END_OF_DOCUMENT_TOKEN_TO_BE_REPLACED

How it works is Tinder users will see a new icon to the left of the GIF box that will say reactions. You can then tap it to display the options after you’ve messaged your match.

Instead of sending a text reply to an in-app message, users can now say NO in a big way or send a tennis ball indicating that the ball is in the other person's court to make the next move and keep the conversation going.

The Tinder team have said that using these animated gifs to reply are important because "reactions speak louder than words."

A 'barrage of hearts' and 'round of applause' are also added in there for good measure and if you get them, you're flying high.

What's the point in matching with someone if you're not actually going to talk to them?

21st-century dating, folks. There are no words, literally.